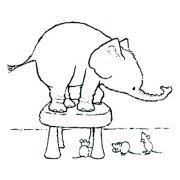 Gov. Palin got in a few good licks at the “Washington press” last night and the McCain campaign has been going after the “liberal media” for actually reporting on the life and times of Ms. Palin’s tenure in office in Alaska. The intent is to cow them into whimpering and handling any future disclosures about her and her professional life with kid gloves. But, as one commenter noted, it reminds me more of a cartoon where an elephant is standing on a stool trembling and screaming about a mouse.

My biggest fear is that the press corps of the traditional kind — the networks, the newspapers, and the newsweeklies — will heed the whining of the Republicans and lay off, fearful of being thrown off the McCain bus and — horrors! — not invited to the barbecues out in Sedona. Sure, the John McCain of 2008 is the polar opposite of the John McCain that ran in 2000; he’s changed positions on more things than A-Rod has changed baseball teams, and he’s hiring the people who demonized him and his family in the South Carolina primary when he ran against George W. Bush in 2000; when “family matters are off limits” didn’t apply. But, gosh darn it, he’s so likable and “mavericky” (HT Digby) that it’s just unseemly to actually hold him to account for the lies, exaggerations, and fear-mongering that he and his campaign will engage in from now until November. And they’re gearing up to shield Gov. Palin, too; every attack on her will be “sexist,” and the press will be sure to be deferential to her; not like they were when Hillary Clinton ran. But that was different. Somehow.

The fact that the McCain campaign can even get away with temper tantrums about “liberal media bias” and get them into the headlines with a straight face tells you a lot about the legacy of the bullying of the Bush administration and the sycophancy of the so-called liberal media, and even with some cracks in the facade, the levees are holding against the tide of real reporting. And frankly, I’d like to see them do it on both parties; dig into Barack Obama’s past and his family and his connections in business and industry and who his big contributors are or what his preacher in his church says in his sermons. Oh, wait…

For once I think Peggy Noonan was right about something: the McCain campaign and its press followers are going for the political bullshit about narratives, not substance.

But hey, that sells papers and gets ratings, and Dog forbid that Keith Olbermann should lose a point to Fox News.