Josh Marshall solves the mystery of the pictures on the screen behind John McCain as he gave his speech last night.

A lot of people were asking tonight: what the hell was that mansion up behind John McCain tonight during the first part of the speech? As I noted below, the TV close-ups only showed McCain’s head against the grass in the picture, which made it look like he was reprising his famed green screen performance. And when they panned out, it looked like McCain was showing off one of his mansions.

Well, several readers have written in to tell me that the building is actually the main building on the campus of the Walter Reed Middle School in North Hollywood, California. And sure enough, this page on the school’s website makes it pretty clear that they’re correct. 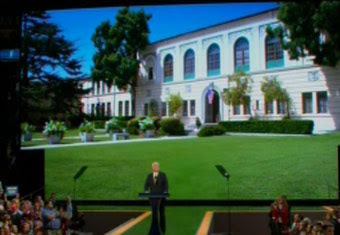 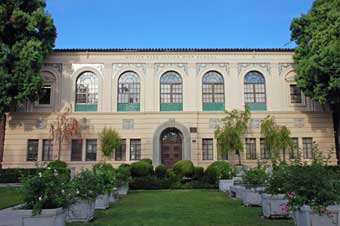 So it’s not a mansion, but a middle school. But that still doesn’t answer the question of why they picked this picture to have him standing in front of — when I would imagine that 99.9% of the US population would have no idea what they were looking at.

Late Update: I’m surprised this hadn’t occurred to me. But several readers have suggested that perhaps one of the tech geeks charged with setting up the audio/visual bells and whistles for the evening was tasked with getting pictures of Walter Reed Army Medical Center but goofed and got this instead. At first I thought, No, that’s ridiculous. This is a major political party with big time professionals putting this together. Nothing is left to chance. I mean, is this the RNC or a scene out Spinal Tap or Waiting for Guffman? I still have a bit of a hard time believing they’re quite that incompetent. But when you figure in what appears to be the utter lack of any logic for this school being behind McCain and the fact that it has ‘Walter Reed’ in its name, I’m really not sure you can discount this possibility.

Are these the same geeks that got Mr. McCain the maps of Czechoslovakia and the Iraq/Pakistan border?