Under the title of Embrace It:

Let’s face it. Lipstick on a pig is a classic American phrase. And there’s just no better way to describe the McCain-Palin ticket. The ‘Reformer’ whose whole campaign and senate office is run by a crew of high-rolling DC lobbyists? The earmark slayer whose state this year got ten times more earmarks than any other state in the country? Whose city when she was mayor got twenty times as many? The whole operation is just one big bamboozling lie. And lipstick on a pig is just using good American English to explain it. If McCain and Palin don’t like it they should have thought of that before they decided to run as frauds. – Josh Marshall 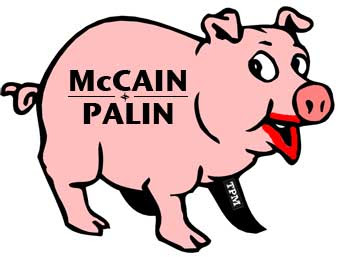 (Updated to add the drawing from TPM.)