The McCain campaign is having a little Heart trouble. 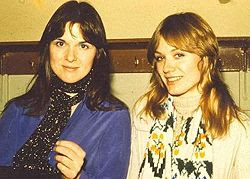 Ann and Nancy Wilson are hoping the Republicans change their tune—and aren’t planning on waiting until November to find out.

The sisterly duo known as Heart sent a cease-and-desist notice to the McCain-Palin campaign Thursday afternoon after their hit “Barracuda” was used—twice—without permission as the official rallying cry for the vice presidential candidate after her nomination acceptance speech at the Republican National Convention.

The song was chosen as a would-be cute tie-in to Alaska Gov. Sarah Palin’s past—”Barracuda” was her high school nickname.

Only problem, campaign officials failed to ask either the group, Universal Music Publishing or Sony BMG whether the song was fair game to use. It wasn’t.

“We have asked the Republican campaign publicly not to use our music,” the Heart duo said in a statement. “We hope our wishes will be honored.”

The Wilsons added that permission to use the song was never requested, nor would it have been granted.

They aren’t the only rockers who object to being ripped off.

John McCain used a Van Halen song during his big speech earlier today and the band wants to make to make one thing clear — they’re not running with McCain.

Van Halen management tells us the band had no idea McCain was planning on using “Right Now” during his big entrance in Ohio telling us, “Permission was not sought or granted nor would it have been given.”

For the record, Dubya used the same song during a bunch of his campaign speeches back in 2004, but sources close to the band tell us, “They’re not political, they’re just rock and roll.”

And I thought John McCain’s favorite group was ABBA. They couldn’t find something of theirs instead?