The Bush administration on Saturday formally proposed a vast bailout of financial institutions in the United States, requesting unfettered authority for the Treasury Department to buy up to $700 billion in distressed mortgage-related assets from the private firms.

The proposal, not quite three pages long, was stunning for its stark simplicity. It would raise the national debt ceiling to $11.3 trillion. And it would place no restrictions on the administration other than requiring semiannual reports to Congress, granting the Treasury secretary unprecedented power to buy and resell mortgage debt.

“This is a big package, because it was a big problem,” President Bush said Saturday at a White House news conference, after meeting with President Álvaro Uribe of Colombia. “I will tell our citizens and continue to remind them that the risk of doing nothing far outweighs the risk of the package, and that, over time, we’re going to get a lot of the money back.”

After a week of stomach-flipping turmoil in the financial system, and with officials still on edge about how global markets will respond, the delivery of the administration’s plan set the stage for a four-day brawl in Congress. Democratic leaders have pledged to approve a bill but say it must also include tangible help for ordinary Americans in the form of an economic stimulus package.

Staff members from Treasury and the House Financial Services and Senate banking committees immediately began meeting on Capitol Hill and were expected to work through the weekend. Congressional leaders are hoping to recess at the end of the week for the fall elections, after approving the bailout and a budget measure to keep the government running.

That, by the way, is more money than we’ve spent on Iraq.

– Jed Barlet Speaks: Maureen Dowd turns her column over to Aaron Sorkin so the former president (if only) can give advice to Barack Obama. 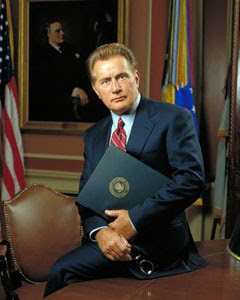 OBAMA The problem is we can’t appear angry. Bush called us the angry left. Did you see anyone in Denver who was angry?

BARTLET Well … let me think. …We went to war against the wrong country, Osama bin Laden just celebrated his seventh anniversary of not being caught either dead or alive, my family’s less safe than it was eight years ago, we’ve lost trillions of dollars, millions of jobs, thousands of lives and we lost an entire city due to bad weather. So, you know … I’m a little angry.

OBAMA What would you do?

BARTLET GET ANGRIER! Call them liars, because that’s what they are. Sarah Palin didn’t say “thanks but no thanks” to the Bridge to Nowhere. She just said “Thanks.” You were raised by a single mother on food stamps — where does a guy with eight houses who was legacied into Annapolis get off calling you an elitist? And by the way, if you do nothing else, take that word back. Elite is a good word, it means well above average. I’d ask them what their problem is with excellence. While you’re at it, I want the word “patriot” back. McCain can say that the transcendent issue of our time is the spread of Islamic fanaticism or he can choose a running mate who doesn’t know the Bush doctrine from the Monroe Doctrine, but he can’t do both at the same time and call it patriotic. They have to lie — the truth isn’t their friend right now. Get angry. Mock them mercilessly; they’ve earned it. McCain decried agents of intolerance, then chose a running mate who had to ask if she was allowed to ban books from a public library. It’s not bad enough she thinks the planet Earth was created in six days 6,000 years ago complete with a man, a woman and a talking snake, she wants schools to teach the rest of our kids to deny geology, anthropology, archaeology and common sense too? It’s not bad enough she’s forcing her own daughter into a loveless marriage to a teenage hood, she wants the rest of us to guide our daughters in that direction too? It’s not enough that a woman shouldn’t have the right to choose, it should be the law of the land that she has to carry and deliver her rapist’s baby too? I don’t know whether or not Governor Palin has the tenacity of a pit bull, but I know for sure she’s got the qualifications of one. And you’re worried about seeming angry? You could eat their lunch, make them cry and tell their mamas about it and God himself would call it restrained. There are times when you are simply required to be impolite. There are times when condescension is called for!

OBAMA Good to get that off your chest?

BARTLET Am I keeping you from something?

OBAMA Well, it’s not as if I didn’t know all of that and it took you like 20 minutes to say.

BARTLET I know, I have a problem, but admitting it is the first step.

OBAMA So what about hope? Chuck it for outrage and put-downs?

BARTLET No. You’re elite, you can do both. Four weeks ago you had the best week of your campaign, followed — granted, inexplicably — by the worst week of your campaign. And you’re still in a statistical dead heat. You’re a 47-year-old black man with a foreign-sounding name who went to Harvard and thinks devotion to your country and lapel pins aren’t the same thing and you’re in a statistical tie with a war hero and a Cinemax heroine. To these aged eyes, Senator, that’s what progress looks like. You guys got four debates. Get out of my house and go back to work.

OBAMA Wait, what is it you always used to say? When you hit a bump on the show and your people were down and frustrated? You’d give them a pep talk and then you’d always end it with something. What was it …? 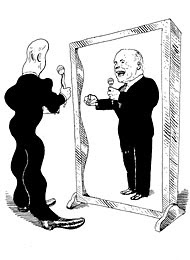 If you doubt that the big lies are sticking, look at the latest Washington Post/ABC News poll. Half of voters now believe in the daily McCain refrain that Obama will raise their taxes. In fact, Obama proposes raising taxes only on the 1.9 percent of households that make more than $250,000 a year and cutting them for nearly everyone else.

You know the press is impotent at unmasking this truthiness when the hardest-hitting interrogation McCain has yet faced on television came on “The View.” Barbara Walters and Joy Behar called him on several falsehoods, including his endlessly repeated fantasy that Palin opposed earmarks for Alaska. Behar used the word “lies” to his face. The McCains are so used to deference from “the filter” that Cindy McCain later complained that “The View” picked “our bones clean.” In our news culture, Behar, a stand-up comic by profession, looms as the new Edward R. Murrow.

Network news, with its dwindling handful of investigative reporters, has barely mentioned, let alone advanced, major new print revelations about Cindy McCain’s drug-addiction history (in The Washington Post) and the rampant cronyism and secrecy in Palin’s governance of Alaska (in last Sunday’s New York Times). At least the networks repeatedly fact-check the low-hanging fruit among the countless Palin lies, but John McCain’s past usually remains off limits.

The twin-pronged strategy of truculence and propaganda that sold Bush and his war could yet work for McCain. Even now his campaign has kept the “filter” from learning the very basics about his fitness to serve as president — his finances and his health. The McCain multihousehold’s multimillion-dollar mother lode is buried in Cindy McCain’s still-unreleased complete tax returns. John McCain’s full medical records, our sole index to the odds of an imminent Palin presidency, also remain locked away. The McCain campaign instead invited 20 chosen reporters to speed-read through 1,173 pages of medical history for a mere three hours on the Friday before Memorial Day weekend. No photocopying was permitted.

This is the same tactic of selective document release that the Bush White House used to bamboozle Congress and the press about Saddam’s nonexistent W.M.D. As truthiness repeats itself, so may history, and not as farce.