– Hurricane Warnings: Myriam Marquez reflects on living on a flat piece of land in the middle of a hurricane zone.

Loaded up on water and ice. Check, check.

Storm shutters, boards, clean up yard. Working on it.

Oh, remember nonperishable food and gas for the barbie.

We’re still recovering from the last big one, three years ago. And it wasn’t anything like the devastation of Andrew in 1992.

I still pass a few blue tarps on roofs in Kendall, where I live, from Wilma damage three years ago.

So pray in whatever language suits you. Cachita, for you a red candle! Except water trumps the Goddess of Fire.

And wind? It’ll rip out those windows on the older condos throughout South Florida, just like Wilma did. So much for toughened building codes after Andrew.

Most of those grandfathered condos didn’t have to replace their shattered windows with impact-resistant glass. Miami-Dade and Broward officials came up with a compromise because they insisted there were just too many condos left waiting for the tougher and more expensive glass. The city of Miami alone had an estimated 20,000 broken windows.

Forget Ike. That’s just a natural symptom of the greater unnatural disease — uber-development in all the wrong places. Maybe Ike will hit Key West by Tuesday, maybe veer to the Gulf. Maybe not.

Nothing will save us from the real storm of destruction — too much construction. We’re fighting a culture war about some ill-perceived God-given right to build on swampland and erect condo canyons up and down the coast, all protected in a storm on the backs of hard-working taxpayers.

Blame Willis Haviland Carrier, the inventor of the first large-scale air conditioner used in 1902. Henry Flagler’s railroad and Carrier’s cold air — complicated by after-shocks created by an assortment of hotheaded despots from Cuba, Haiti and Latin America, along with those sweet snowbirds fleeing state income taxes — got us here.

Sure, we love it (or we love to complain about the traffic, the bad attitudes and the rising taxes and insurance costs). Plus the combustible mix of traffic and guns. (Not that I’m against guns — only the fools who misuse them.)

Evacuation plan in a flood?

Mount Trashmore awaits the huddled masses. If we survive the wind, that 150-foot trash pile in South Dade may be our salvation.

You gotta love this campaign. No sooner does the curtain come crashing down on one climactic moment than up it goes on another. The Democrats choose NoDrama Obama and the channel switches to Soap Opera McCain. You want change? I’ll show you change: Introducing Sarah Palin, a running mate as unfamiliar as the tundra.

Talk about rolling the dice. The idea was to connect to the Hillary supporters. These women, dismayed by the idea that the experienced female was passed over for a fresh male face, were supposed to be won over by a patently inexperienced fresh female face. Never mind that this feisty working mom leans — no, falls — right on social issues. You go, Clara Thomas. Oops, I mean you go, girl.

The Straight Talk Express twisted itself into a pretzel trying to defend her qualifications to be commander in chief. More to the point, the mother of five had a personal story meant to capture the imagination of the American people, whose minds were beginning to wander ominously to such nonentertaining narratives as the Iraq War and the economy.

As for the candidate as mother, is it beyond the pale to wonder whether Sarah Palin and her husband should have thought first of shielding their pregnant daughter from a media lens that they know will focus on the baby bump and a marriage that will take place during a national campaign? Has the candidate who mocked Obama for his celebrity status, comparing him to Paris Hilton, created the newest Jamie Lynn Spears?

I remember way back when the late Elizabeth Janeway, a doyenne of the women’s movement, imagined the first woman president. She would be a vice president picked for ”balance” and elevated by fate to the Oval Office. More to the point, Janeway fantasized archly and knowingly, she would be a conservative Republican who believes in the status quo.

Sarah Palin? So far, she looks like a Bridge to Nowhere.

– Frank Rich: What does Sarah Palin tell us about John McCain? 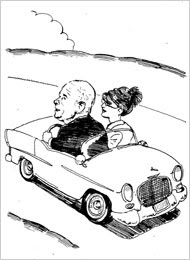 He wanted to choose the pro-abortion-rights Joe Lieberman as his vice president. If he were still a true maverick, he would have done so. But instead he chose partisanship and politics over country. “God only made one John McCain, and he is his own man,” said the shafted Lieberman in his own tedious convention speech last week. What a pathetic dupe. McCain is now the man of James Dobson and Tony Perkins. The “no surrender” warrior surrendered to the agents of intolerance not just by dumping his pal for Palin but by moving so far to the right on abortion that even Cindy McCain seemed unaware of his radical shift when being interviewed by Katie Couric last week.

That ideological sellout, unfortunately, was not the worst leadership trait the last-minute vice presidential pick revealed about McCain. His speed-dating of Palin reaffirmed a more dangerous personality tic that has dogged his entire career. His decision-making process is impetuous and, in its Bush-like preference for gut instinct over facts, potentially reckless.

As The New York Times reported last Tuesday, Palin was sloppily vetted, at best. McCain operatives and some of their press surrogates responded to this revelation by trying to discredit The Times article. After all, The Washington Post had cited McCain aides (including his campaign manager, Rick Davis) last weekend to assure us that Palin had a “full vetting process.” She had been subjected to “an F.B.I. background check,” we were told, and “the McCain camp had reviewed everything it could find on her.”

The Times had it right. The McCain campaign’s claims of a “full vetting process” for Palin were as much a lie as the biographical details they’ve invented for her. There was no F.B.I. background check. The Times found no evidence that a McCain representative spoke to anyone in the State Legislature or business community. Nor did anyone talk to the fired state public safety commissioner at the center of the Palin ethics investigation. No McCain researcher even bothered to consult the relevant back issues of the Wasilla paper. Apparently when McCain said in June that his vice presidential vetting process was basically “a Google,” he wasn’t joking.

This is a roll of the dice beyond even Bill Clinton’s imagination. “Often my haste is a mistake,” McCain conceded in his 2002 memoir, “but I live with the consequences without complaint.” Well, maybe it’s fine if he wants to live with the consequences, but what about his country? Should the unexamined Palin prove unfit to serve at the pinnacle of American power, it will be too late for the rest of us to complain. 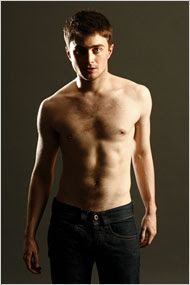 To study the behavior of men under stress you won’t need to look much farther than the front pages of newspapers this fall. The surprise entry into the race of a certain moose-eating, gun-toting grandma-to-be caused a minor shift in the focus, but most of the news-media glare will soon rest once more on the flaws and strengths, the goofs and the gaffes of the two men leading the tickets.

Perhaps by way of competing for attention during a historic presidential campaign, Broadway is also shining a bright spotlight on the male psyche this autumn. A handful of productions, probably converging by coincidence, will provide a season-long seminar on the subject of the male animal under pressure. Young and old, morally healthy or mentally sick, manipulated or manipulating, embattled or empowered, men of all kinds will be dominating the theater district this season, mostly in revivals of various vintages.

Is it a reaction against last season, when the New York stage seemed to be overtaken by domineering women? The play of the year, of course, was “August: Osage County,” Tracy Letts’s hair-raising family saga focused on a mother-daughter smackdown. And the most hotly debated and attention-getting performance came from Patti LuPone as Momma Rose in “Gypsy,” a musical that also focuses on a mother-daughter conflict, this one somewhat less savage and partly conducted in song. Whatever the reason, wives and mothers are taking a definite back seat to their husbands, fathers and sons this fall on Broadway stages.

A young man in a state of serious sexual and psychological anxiety sweats at center stage in the revival of Peter Shaffer’s “Equus,” which opens on Sept. 25 at the Broadhurst Theater after a stampede-inducing run in the West End of London. The clamor was not inspired by a fervent need to revisit Mr. Shaffer’s drama from 1973, about a stable boy obsessed to the point of psychosis with horses under his care. No, it was another case of collective celebrity fever, an illness itself in need of inclusion in the latest version of the Diagnostic and Statistical Manual of Mental Disorders.

The role of the freaked-out horse worshiper is taken by Daniel Radcliffe, who is apparently the star of a fantasy film series based on books about a British boy with nerdy eyeglasses and magical powers. (Henry somebody?) The estimable Richard Griffiths, seen recently on Broadway in “The History Boys,” portrays the psychiatrist who seeks to cure him but comes to envy the confused lad a wee bit too.

– The Dolphins open the season at home against the Jets, and the Lions kick off in Atlanta.