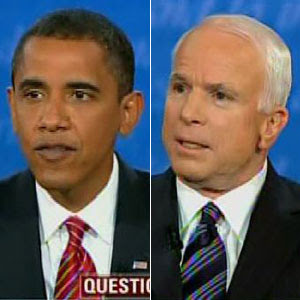 All of the good metaphors have been taken — the folks at MSNBC ran through all the sports ones; boxing, baseball, and football, and Gail Collins at the New York Times even used the one from summer camp — and all of the highlights have been noted, too; Joe the Plumber, the newest “everyman” symbol, will probably wake up this morning with CNN parked in his driveway in Holland, Ohio, and be hounded for his reaction. The pundits are going to pick him over until the next shiny object comes along. All I can say is that Barack Obama didn’t lose and John McCain didn’t win.

The overnight snap polls give it overwhelmingly to Mr. Obama, and that will probably be the indicator of the rest of the responses, and the so-called “uncommitted” voters gave it to Mr. Obama as well. As I said last night, I think that if the outcome of the polls is based on performance, then they weren’t judging it on substance because we really didn’t hear anything new. Then again, you never really do hear anything new at these events unless it’s a gaffe.

I think Mr. McCain has begun to believe the mantra of Sarah Palin; he’s got nothing to lose, which would explain his attempt to throw everything he had at Mr. Obama, who deflected them well, including the much-anticipated Ayers assault. If anything, that made Mr. McCain look desperate; at one point he said he didn’t care about an old “washed-up terrorist,” but then kept harping on him.

To Mr. Obama’s credit, he maintained his cool throughout the whole night to the point that, as Brian noted to me in an IM, it was BORING. I agreed to a point, but as Andrew Sullivan noted, in the case of Barack Obama, boring is good. It gives the uneasy white voter the impression that Mr. Obama is not some kind of scary black dude, and “haven’t we had enough drama in the last eight years? Boring is fucking awesome after Bush.” The cool demeanor not only accomplished that, but it also seemed to get under McCain’s skin; Mr. Obama never rose to the bait and never showed a flare of temper. Even more than that, he was able to come back to the admittedly best line Mr. McCain’s been able to come up with in three debates — “I’m not President Bush” — by saying that if he mistakes him for Bush, it’s because he follows his economic policies most of the time.

I think Mr. McCain will come to regret his mocking of the “health of the mother” argument on the abortion question; that makes him a hero to the far-right every-sperm-is-sacred crowd, but will offend people who see that exception as something that both pro and anti-choice advocates seem to agree on. His defense of his selection of Sarah Palin because she’s a “freath of bresh air” (paging Rev. Spooner) makes it sound like he chose her for no other reason than that, and that’s both an insult to the intelligence of the voters and calls into question his judgment, especially when he skates out onto the thin ice of knocking Joe Biden on foreign policy (There’s a sports metaphor after all).

So by just staying above the fray and showing grace under pressure, the debate goes to Mr. Obama. That’s 3-0, and with 19 days to go, that’s probably enough. And if I never hear about Joe the Plumber (or see the obligatory picture of plumber’s crack), it will be fine with me.

PS: NPR does some fact-checking on the points from last night’s debate.