My brother reports in from the Pacific Northwest on how popular the Republican brand is.

Turns out the last thing you want to be called these days is “Republican”. We have two great examples here in Washington state.

We had a very tight governors race four years ago in which the Democrat, Christine Gregoire won on the third (hand) recount by 143 votes. The Republicans were outraged and claimed the election was stolen. Now, the challenger, Republican Dino Rossi, is running again to defeat her. But the last thing you want to be is a “Republican”, so he has requested to be listed on the ballot as “prefers GOP party.” Never mind that this means “Grand Old Party Party”, it’s clear he’s playing off the fact that few know that GOP = Republican, and distancing himself from Bush as much as possible. It so outraged the state Democratic party that they asked a judge to overturn it. He refused. So he’s a party party dude.

Now, I’m driving home and see the signs for a guy running for the local state house. It’s a name I don’t recognize. I know the incumbent, Roger Goodman; he came to our door and we had a nice chat the last time he ran. The new guy’s sign is: 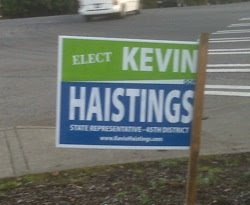 Sorry for the crappy cell phone picture, but even with this lousy shot I’m sure you can make out that they want you to “Elect Kevin Haistings,” and maybe you can see it says “State Representative – 45th District,” and even a web address. But what party? Hmmm… I drove by these signs for days before I found it. If you look really closely, there’s a white line between “Kevin” and “Haistings”, and it gets a little wider on the right, and over in the corner, almost stapled into the post you see a tiny “GOP”. Guess Mr. Haistings would rather you not know he’s a Republican as well.