FiveThiryEight reports on an incident at a McCain rally today here in Miami. 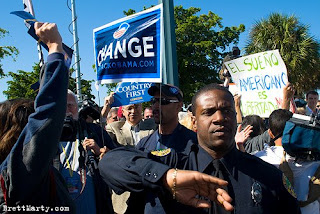 Tonight we’ll be at the Obama-Clinton rally in Kissimmee, Florida, and we’re breaking in from Miami, where John McCain just concluded his “Joe the Plumber” rally at Everglades Lumber.

After the rally, we witnessed a near-street riot involving the exiting McCain crowd and two Cuban-American Obama supporters. Tony Garcia, 63, and Raul Sorando, 31, were suddenly surrounded by an angry mob. There is a moment in a crowd when something goes from mere yelling to a feeling of danger, and that’s what we witnessed. As photographers and police raced to the scene, the crowd elevated from stable to fast-moving scrum, and the two men were surrounded on all sides as we raced to the circle.

The event maybe lasted a minute, two at the most, before police competently managed to hustle the two away from the scene and out of the danger zone. Only FiveThirtyEight tracked the two men down for comment, a quarter mile down the street.

“People were screaming ‘Terrorist!’ ‘Communist!’ ‘Socialist!'” Sorando said when we caught up with him. “I had a guy tell me he was gonna kill me.”

Asked what had precipitated the event, “We were just chanting ‘Obama!’ and holding our signs. That was it. And the crowd suddenly got crazy.”

All that’s missing are the brown shirts.