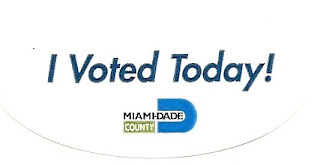 Early voting began for this election season on Monday, October 20, at twenty locations throughout Miami-Dade County. All the reports were that there were long lines and people waiting three and four hours to vote. Since early voting doesn’t require that you vote in your precinct, the twenty stations can accept voters from anywhere in the county. When you get to the clerk’s station and give them your registration and ID, they print out a ballot for your precinct.

Because of my work schedule and out of curiosity, I decided to vote early this time. I’ve been voting since 1972, and although early voting has been around for a while, I was a traditionalist; I felt there was something significant about casting my ballot on the actual Election Day. It’s not that I hadn’t made up my mind about my choices, but I’m also the kind of person who will wait until Christmas morning to open my presents, too. So throwing tradition to the winds and going along with the idea that this is a “change election,” I grabbed my car club ball cap and drove over to my nearest Early Voting site, which is the Coral Reef Library. Early voting was open today from 9:00 a.m. to 1:00 p.m. It was a nice Florida fall morning; partly cloudy, around 82, and a little humid.

I got there at 9:38 a.m. I had to park in the lot of a medical office two buildings over. The berm in front of the library was packed with people waving signs from every campaign, and after I parked, I had to wade my way through the forest of signs for Barack Obama, John McCain, Raul Martinez, Vote Yes on Amendment 2, Vote No on Amendment 2, Vote for Judge Colodny, and every other county-wide name you could think of, plus some I’d never heard of. The line started at the front of the library, went out onto the sidewalk, then turned north and went 100 yards to the back of the lot, which was marked by a cement wall about five feet tall. The line continued west another 100 yards or so past the open lawn behind the library, then turned south and went another 100 yards back to the street. I got in the line about half-way down the southbound wall behind a couple of ladies with small children in tow. The people in line were young, old, black, white, Hispanic, straight, gay (well, at least one — me), and appeared to be from every walk of life in both Miami-Dade County and the rest of the country. There were families with small children, teenagers voting for the first time, elderly couples with lawn chairs and books to read, and everywhere were campaign workers passing out literature (I declined each one with a polite “no, thanks,” including the sweet little lady passing out the fliers from the Christian Coalition). There were also some people handing out bottles of water, which were gratefully accepted. (No one, however, had the foresight to rent a Porta-Potty. That would have come in very handy.)

After forty-five minutes, the line had moved about 100 yards, and while I had brought along a book to read (Brideshead Revisited), I found myself passively eavesdropping on my fellow queuers; the young couple behind me who switched between Spanish and English were apparently planning to cancel each other’s votes; he was for McCain while she was for Obama. The lady in front of me with the small children patiently entertained them, and her son, who was almost three, found a stick so he ran around the lawn doing an amazing imitation of a lawn guy with a Weed-Eater, right down to the sound.

After an hour, I noticed that no one in the line was expressing any sort of impatience. Like me, they seemed to be content to wait their turn, and we noticed that one of life’s little mysteries was that the line moved faster when we were in the shade of the live oak trees and slowly when we were in the sun. Some compared it to standing in line at Disney waiting to get to ride on Space Mountain.

Another hour went by. I talked to Boatboy on the phone for a while, and then noticed that while I was talking I had actually moved up to the point where I was standing on the sidewalk in the parking lot. Another fifty yards or so and I would make the turn to the sidewalk in front of the library and actually see the front door. Campaign workers were now passing among us with more water and candy and a couple of candidates from local races such as the Pinecrest City Council were doing some handshaking, well outside the “no campaigning beyond this point” line.

Poll workers were now visible, counting us out and moving us up in the line in small groups. The election officials announced that anyone in the line at 1:00 p.m. would be allowed to vote. Finally, at 1:10 I was ushered into the library and the relief of the air conditioning, and I handed one of the clerks at the seven or eight computer terminals my registration and picture ID, got my customized ballot, and was escorted to one of the twenty or so privacy booths to fill out the two pages of my ballot, making sure to mark both sides, and making sure to fill in the little “bubble” mark completely, just like doing the answer sheet on an SAT. I was then taken to a scanner where I inserted the ballot pages and watched as the optical scanner read and tallied my vote. The nice little man handed my my “I VOTED TODAY!” sticker, and at 1:30 p.m., approximately three hours and fifty minutes after arriving, I was done.

As I walked out of the library and back to the parking lot, I noticed that the line still stretched around the building, and standing where I had stood four hours before was a man in a baseball cap reading a book, waiting in line to vote.