He tied up traffic in midtown Miami, but the crowd didn’t seem to mind. 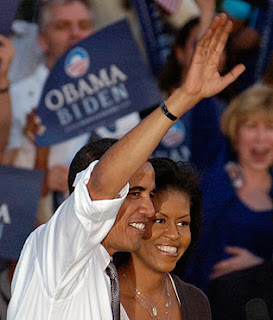 Democrat Barack Obama’s two-day sweep across Florida showed he can whip up overflow crowds, orchestrate a massive early-voting blitz and rattle off the state’s grim economic statistics to drive home his indictment of the Republican Party.

The campaign’s reach into nearly every corner of Florida also forced Republican John McCain to hightail it back to a state that once leaned heavily in his favor, with plans to campaign Thursday in Central Florida.

But as the third statewide poll in a week showed the race tightening in McCain’s favor, Obama left Tuesday night with Florida still up for grabs.

”We’re going to have to fight for every single one of these last 14 days,” Obama told about 30,000 people who jammed Bicentennial Park in Miami on Tuesday evening. ”We can’t let up, Florida, and we won’t.”

A survey by Public Policy Polling released Tuesday found Obama’s three-point lead in Florida had dropped to a single digit, as more whites and Hispanics gravitated toward McCain.

The South Beach Bum went and has pictures, and Blast Off! live-blogged it.

I still think the Democrats can win the state. Not by much, given the grip the right wing has upstate — or “Lower Alabama,” as they call it — but it could happen. FiveThirtyEight shows it as leaning Democratic.