Barack Obama rolled out a series of proposals to fix the economy at a speech in Toledo on Monday. The Blade has the coverage. 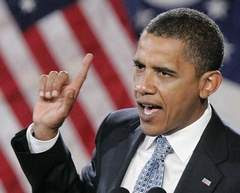 Saying the nation’s economic crisis is the worst since the Great Depression, presidential candidate Barack Obama Monday afternoon unveiled an economic rescue plan for the middle class at a downtown Toledo rally.

The Democratic candidate spoke at SeaGate Convention Centre before more than 3,100 regarding his four-part plan that includes expansion on some of his past proposals — as well as new ideas.

“I know these are difficult times and I know folks are worried,” he said to the crowd.

Highlights of his plan include:

* A temporary tax credit of $3,000 for firms that create new jobs in the United States over the next two years.

* New legislation that would allow families to withdraw 15% of their retirement savings — up to a maximum of $10,000 — without facing a tax-penalty this year (including retroactively) and next year.

* A 90-day foreclosure moratorium for homeowners that are acting in good faith.

* Calling on the Federal Reserve and the Treasury to work to establish a facility to lend to state and municipal governments.

Mr. Obama’s plan also calls for temporarily eliminating taxes on unemployment insurance benefits; keeping all options on the table to help automakers deal with the financial crisis; having the Fed and Treasury prepare for guaranteeing a broader range of liabilities of the banking system; and instructing Treasury to help unfreeze markets for individual mortgages, student loans, car loans, loans for multi-family dwellings and credit card loans.

“Toledo, I won’t pretend that this will be easy. We’re going to have to attach priorities. We will have to defer in areas. We’ll have to go through federal budget one by one,” he said.

Mr. Obama spoke frequently about the city of Toledo, and he lauded Toledo for its work in solar energy.

Should he be elected president, Mr. Obama said “we’ll take a page from Toledo” when it comes to solar.

At one point, the crowd booed when Mr. McCain’s name was mentioned. But Mr. Obama stopped them from doing so.