In his endorsement of Barack Obama, Colin Powell referred to the photograph of the headstone marking the grave of Cpl. Kareem Rashad Sultan Khan at Arlington National Cemetery.

…it gave his awards–Purple Heart, Bronze Star–showed that he died in Iraq, gave his date of birth, date of death. He was 20 years old. And then, at the very top of the headstone, it didn’t have a Christian cross, it didn’t have the Star of David, it had crescent and a star of the Islamic faith. And his name was Kareem Rashad Sultan Khan, and he was an American. He was born in New Jersey. He was 14 years old at the time of 9/11, and he waited until he can go serve his country, and he gave his life. 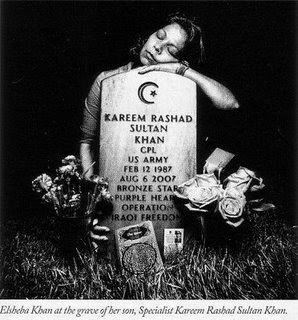 It sort of puts “Joe the Plumber” into perspective, doesn’t it?