It will be the Phillies vs. the Rays in the World Series. This is the first time the Rays have made it to post-season, let alone the Series, but they earned it. Even the Boston Globe calls is a “righteous” win. 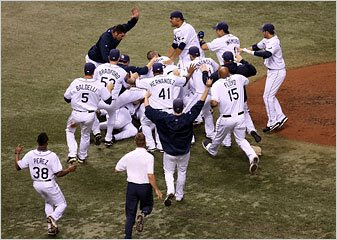 It feels like Super Bowl XLII all over again. History derailed. Again.

The Red Sox were going to the World Series. They stole Game 5 at Fenway last week, then overwhelmed the Tampa Bay Rays Saturday night. When Dustin Pedroia homered in the first inning of Game 7 last night, the young Rays were ready to fold. Jon Lester had a perfect game and a 1-0 lead after three.

Bring on the Phillies. Read all about the Red Sox dynasty of the 21st century.

The Rays sent Red Sox Nation into winter with a righteous 3-1 victory at Tropicana Field. Matt Garza, a 24-year-old righty from Fresno State, blinded the Red Sox on two hits over seven innings and David Price, a rookie reliever with five regular-season big league games on his résumé, sealed the deal in the eighth and ninth. The World Series opens Wednesday night at the Trop.

So there you have it, Sox fans. Dome to Dome. Hopes dashed to dust.

Go AL all the way.