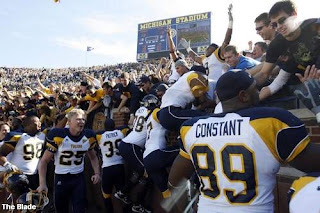 ANN ARBOR – This one cost Michigan much more than the $500,000 it paid Toledo to visit the Big House.

And for the Rockets, well, they can’t even put a value on it.

UT shocked the Wolverines, the oddsmakers and all of college football yesterday with a 13-10 triumph in front of 107,267 stunned fans at Michigan Stadium. The Rockets, playing a varsity game against traditional national power UM for the first time in school history, were 16 1/2-point underdogs.

“As a team we came in confident, and we knew that we had a chance to win this game,” said UT safety Tyrrell Herbert, who keyed the Rockets’ victory with two interceptions – including one he returned 100 yards for a touchdown in the first quarter.

The Rockets defeated Penn State 24-6 on Sept. 2, 2000, but that UT team went on to win 10 games. The bunch who took the field against the Wolverines yesterday had just one win in five games, were losers of their last three contests (all at home) and hadn’t scored a point in six quarters.

– Sharpening the Knives: The election is still three weeks away, but already the GOP is showing signs of discord and recriminations for the losses they anticipate here in Florida.

For the first time in more than a decade, Florida Republicans are considering the almost unthinkable: Their presidential nominee could lose the state.

The economy, an unpopular president, a strong opponent, and the inability of John McCain to reverse poll numbers despite repeatedly revising his strategy has top state Republicans looking for someone to blame.

”There are a lot of folks who have never been in a foxhole before and are clearly nervous,” said Brian Ballard, a major McCain fundraiser. ”There is some finger-pointing going on a little bit too soon.”

Even Gov. Charlie Crist, who helped deliver Florida for McCain during the primary, said he will spend the final weeks before Election Day minding the state’s weak economy rather than campaigning for the Arizona senator.

”When I have time to help, I’ll try to do that,” Crist said last week, after he flew around the state with McCain running mate Sarah Palin. Saturday, he skipped a McCain football rally and instead went to Disney World.

Once considered a potential running mate, Crist had pledged to do all he could for McCain and spent several days this summer campaigning for the Republican nominee in and outside Florida. He faults the tough economic times for McCain’s difficult time in Florida, where he trails rival Barack Obama by about 5 percentage points in the polls.

No Republican has won the White House in modern times without carrying Florida. The last to lose the state was McCain’s former colleague, Sen. Bob Dole, in 1996. Some Republicans say the state party hasn’t done enough, while others blame McCain’s national campaign.

”This effort lacks coordination and a cooperative spirit and it’s showing,” Stone said. ”But it’s more than mechanics. The campaign has no consistent message.”

Over the summer, the Obama camp spent at least $10 million on Florida television ads — 4,000 of the spots attacking McCain — while McCain spent nothing.

The failure by the party and McCain’s campaign to respond to an Obama radio ad in Florida that bashed McCain over embryonic stem-cell research was ”a perfect example of them not being on the ball in Florida,” Stone said, echoing numerous Florida Republicans. But national campaign officials said McCain is within striking distance of Obama in the polls, has ample time to turn things around, and had a winning strategy until Wall Street’s crash.

– Troy, Ohio with FiveThirtyEight: The poll site is doing its own version of On the Road as it looks at the people who will be voting in November. 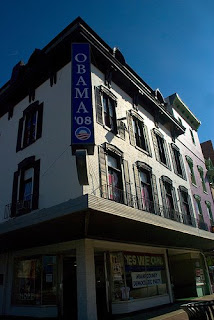 The first thing that stands out about the Troy, Ohio Obama field office is its placement. It’s right in the heart of town. It catches everyone’s attention — you can’t miss it.

The next thing that caught our attention was that, since the office had first opened, 800 different people from Miami County had come through the office’s doors to volunteer. There were only 51,760 voters in the entire county in 2004, and a mere 17,606 were Kerry voters.

4.5% of the entire Miami County Kerry vote has already walked in the doors to volunteer.

This is a brand new development. Ed White, a first-time volunteer who spoke to us in the Troy office, said he’d lived here 24 years and had long “felt the stultifying effect of speaking up in a community so Republican.” Miami County went for Bush by 32 points in 2004. After that election, there were bitter feelings in an tight-knit area woven together by approximately 33 community organizations and dinner clubs. National issues had split ordinarily more connected people apart, and without Democratic organization, folks like Ed felt isolated.

This year, Ed is volunteering along with everyone else.

How did he get started? I asked. A friend named Margaret Begg had talked to him a handful of times, and soon enough Ed was in the office. “Everybody assumes everybody else is a Republican here,” he said. The office location opened things up.

For her part, Begg has helped ignite a Democratic grassroots awakening in Miami County. Jake Schlachter, a Troy native who returned to Ohio to help out in this year’s election and who was there for that first meeting, told us he’s been amazed to observe his hometown’s transformation. Starting from the spring with a group of five around Begg’s kitchen table, the grassroots effort grew to 16, then 41, then 85, then over 200. The most inspiring thing Schlachter says he’s seen this year is now that Begg and her husband have led this grassroots shift, they’re indefinitely suspending plans they’d had to move away. The Beggs want to stay and build the infrastructure. 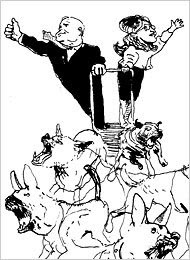 All’s fair in politics. John McCain and Sarah Palin have every right to bring up William Ayers, even if his connection to Obama is minor, even if Ayers’s Weather Underground history dates back to Obama’s childhood, even if establishment Republicans and Democrats alike have collaborated with the present-day Ayers in educational reform. But it’s not just the old Joe McCarthyesque guilt-by-association game, however spurious, that’s going on here. Don’t for an instant believe the many mindlessly “even-handed” journalists who keep saying that the McCain campaign’s use of Ayers is the moral or political equivalent of the Obama campaign’s hammering on Charles Keating.

What makes them different, and what has pumped up the Weimar-like rage at McCain-Palin rallies, is the violent escalation in rhetoric, especially (though not exclusively) by Palin. Obama “launched his political career in the living room of a domestic terrorist.” He is “palling around with terrorists” (note the plural noun). Obama is “not a man who sees America the way you and I see America.” Wielding a wildly out-of-context Obama quote, Palin slurs him as an enemy of American troops.

By the time McCain asks the crowd “Who is the real Barack Obama?” it’s no surprise that someone cries out “Terrorist!” The rhetorical conflation of Obama with terrorism is complete. It is stoked further by the repeated invocation of Obama’s middle name by surrogates introducing McCain and Palin at these rallies. This sleight of hand at once synchronizes with the poisonous Obama-is-a-Muslim e-mail blasts and shifts the brand of terrorism from Ayers’s Vietnam-era variety to the radical Islamic threats of today.

That’s a far cry from simply accusing Obama of being a guilty-by-association radical leftist. Obama is being branded as a potential killer and an accessory to past attempts at murder. “Barack Obama’s friend tried to kill my family” was how a McCain press release last week packaged the remembrance of a Weather Underground incident from 1970 — when Obama was 8.

We all know what punishment fits the crime of murder, or even potential murder, if the security of post-9/11 America is at stake. We all know how self-appointed “patriotic” martyrs always justify taking the law into their own hands.

Obama can hardly be held accountable for Ayers’s behavior 40 years ago, but at least McCain and Palin can try to take some responsibility for the behavior of their own supporters in 2008. What’s troubling here is not only the candidates’ loose inflammatory talk but also their refusal to step in promptly and strongly when someone responds to it with bloodthirsty threats in a crowded arena. Joe Biden had it exactly right when he expressed concern last week that “a leading American politician who might be vice president of the United States would not just stop midsentence and turn and condemn that.” To stay silent is to pour gas on the fires.

– Opus: Where will Opus end up?