– The Pulpit is For Preaching: The Blade on political endorsements as a part of a sermon.

NEARLY three dozen pastors in churches in 22 states stuck their toes across the line separating issue advocacy from endorsement of specific candidates a week ago today. Fortunately, their attempt to spark a court battle in hopes of overturning rules prohibiting political endorsements by tax-exempt houses of worship likely will fail.

They took part in “Pulpit Freedom Sunday” at the urging of the Alliance Defense Fund, a conservative legal group based in Arizona that believes the 1954 law that made it illegal for tax-exempt organizations to publicly support or oppose political candidates is unconstitutional.

Why, indeed, should not ministers, priests, rabbis, mullahs, and other religious leaders speak from their pulpits to urge their flocks to support specific candidates? Doesn’t the First Amendment protect speech absolutely?

As a matter of fact, the First Amendment does prohibit Congress from making any law “abridging the freedom of speech.” But it has also long been recognized that government can treat political and nonpolitical speech differently, limiting the former in ways that it cannot the latter.

Pastors are not being denied the right to endorse candidates. They can take part in whatever political activity they wish outside their churches. They’re not even being denied the right to endorse from the pulpit. Instead, limits on politicking from the pulpit are a precondition for maintaining tax-exempt status. Donations to religious organizations are tax deductible, political donations are not.

The purpose of the 1954 law was to prevent religious donors from deducting political donations from their taxes. If they give up their tax-exempt status, religious leaders can use their sermons to endorse anyone they choose, but they are not inclined to do that.

The current restrictions are hardly odious. Pastors can make plain their religious positions on social and moral issues; but they must stop short of naming names.

That is what groups such as ADF want at least Christian churches to be able to do. ADF believes congregants are both stupid and easily influenced by authority figures. It’s less clear whether they’d want mullahs and rabbis doing the same thing.

U.S. religious leaders have a long, positive history of political activism. They also serve the vital functions of promoting voter registration and providing voter information. They can do so, in part, precisely because they honor the line that separates issue advocacy and partisan politics.

As the Rev. Eric Williams, a United Church of Christ minister in Ohio wrote, according to the Washington Post, “The role of the church … and of its religious leaders is to stand apart from government, to prophetically speak truth to power, and to encourage a national dialogue that transcends the divisiveness of electoral politics and preserves for every citizen our ‘first liberty.'”

It’s also ironic that these pastors, who demand equal rights to speak out about political matters and say that the tax laws restrict their rights as citizens, have no problem whatsoever in supporting laws and Constitutional amendments that restrict the rights of members of their own congregation who happen to be gay or lesbian.

– Gay Families: Michael Mayo notes in the Sun-Sentinel that no matter what the law says, gay families are here. 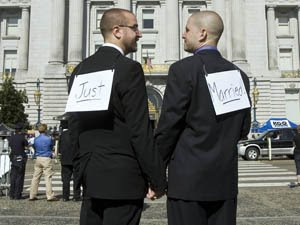 Adelle Barsky-Moore is 5, and she doesn’t know about wedge politics and the Culture War. All she knows is that she loves her two dads and they love her.

Her parents, Allan Barsky and Greg Moore, have been together 10 years. They were married in Canada, Barsky’s native country, in 2003. They wear wedding bands, are registered domestic partners in Broward and live in Lauderdale-by-the-Sea.

Barsky, a professor at Florida Atlantic University, is opposed to Amendment 2 on the November ballot. It would constitutionally define marriage in Florida as between a man and woman. It states, “No other legal union that is treated as marriage or the substantial equivalent thereof shall be valid or recognized.”

A few weeks ago, Adelle tagged along as her parents campaigned against the amendment.

“Why are you telling people not to vote?” she asked.

Barsky explained they want people to vote, but were telling them to vote no on the amendment. He explained it wouldn’t allow two moms or two dads to get married.

“She got really upset and started crying,” Barsky said. “She said, ‘If it passes, does that mean you and daddy have to break up?'”

Barsky told me this story last weekend, during a group picnic at Holiday Park in Fort Lauderdale. Adelle and other kids romped on the playground while parents kept an eye on them. There was fried chicken, macaroni salad and brownies on the pavilion tables.

“Just like anyone else on a Sunday afternoon,” Barsky said.

The group, South Florida Family Pride, has been getting together for the last six years. It sprouted from a Yahoo! forum board and now has more than 250 registered families. They have picnics and holiday parties, celebrate new arrivals and share frustrations.

“The first time we came, I started to cry,” said Thea Sommer, of Weston, who has two children from a previous marriage and a partner of five years, Maria DiPietro-Sommer. “It was like, ‘Oh my God, we’re not alone.'”

Said Michael Gallacher, a group co-founder who has two children: “It means so much for these kids to see they’re not the only ones with two moms or two dads.”

More than anything I could say, this scene showed why Amendment 2 is irrelevant, misguided and just plain wrong.

In that respect it doesn’t matter what state law, which bans gay marriage and gay adoption, or the Florida Constitution says.

Except it does matter. For these families, life would be easier, less stressful and more just if the state gave them the same rights as heterosexuals.

For now, they’ll consider it victory enough if an amendment that codifies inequality doesn’t get the 60 percent needed for approval.

“People should have 100 more important things to worry about these days than whether or not we can get married,” said Karen Lynskey-Lake, of Weston. “It’s beyond ridiculous.”

Margel Zukunft, 81 years old, pulled weeds from around a for-sale sign on a recent evening outside her three-bedroom home in the Sun City retirement community near Tampa.

Alone for the past decade, she longs to move to a condominium offering dinner companions and lawn care. But in this panic-stricken economy, Zukunft has no offers — and shaky confidence in both Democrat Barack Obama and Republican John McCain.

”I can almost remember in 1929 when people went to the bank and took their money out, and I can’t help but wonder if I should do that,” she said. ”I wonder if either candidate is capable of getting this mess straightened out.”

Zukunft’s anxiety about the economy is a strong current that runs through the disparate communities clustered along Interstate 4, the Central Florida highway considered a gateway to one-tenth of the electoral votes needed to win the White House.

Nearly one out of five of the state’s unaffiliated voters live in this swath between Tampa and Daytona Beach, and an even higher percentage are considered ”persuadable” Democrats and Republicans. No wonder the area is seeing a flurry of candidate visits, with Republican vice presidential contender Sarah Palin slated to campaign Monday in Clearwater and Fort Myers.

”Someone suggested to me that the whole thing could come down to a couple square blocks in downtown Tampa, and that’s not out of the question,” said Richard Scher, a University of Florida professor, who calculated that the 12 counties hugging I-4 host 38 percent of the state’s independent voters.

The latest statewide polls tell a familiar story, with the Republican nominee dominating the northern part of the state and the Democrat carrying the more liberal southern end, leaving the state’s heterogeneous midsection up for grabs.

Most polls give Sen. Obama a slight lead in Florida. 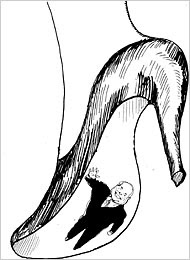 After the debate, Republicans who had been bailing on Palin rushed back to the fold. They know her relentless ambition is the only hope for saving a ticket headed by a warrior who is out of juice and out of ideas. So what if she is preposterously unprepared to run the country in the midst of its greatest economic crisis in 70 years? She looks and sounds like a winner.

You can understand why they believe that. She has more testosterone than anyone else at the top of her party. McCain and his surrogates are forever blaming their travails on others, wailing about supposed sexist and journalistic biases around the clock. McCain even canceled an interview with Larry King, for heaven’s sake, in a fit of pique at a CNN anchor, Campbell Brown.

We are not a nation of whiners, as Phil Gramm would have it, but the G.O.P. is now the party of whiners. That rebranding became official when Republican House leaders moaned that a routine partisan speech by Nancy Pelosi had turned their members against the bailout bill. As the stock market fell nearly 778 points, Barney Frank taunted his G.O.P. peers with pitch-perfect mockery: “Somebody hurt my feelings, so I will punish the country!”

Talk about the world coming full circle. This is the same Democrat who had been slurred as “Barney Fag” in the mid-1990s by Dick Armey, a House leader of the government-bashing Gingrich revolution that helped lower us into this debacle. Now Frank was ridiculing the House G.O.P. as a bunch of sulking teenage girls. His wisecrack stung — and stuck.

Palin is an antidote to the whiny Republican image that Frank nailed. Alaska’s self-styled embodiment of Joe Sixpack is not a sulker, but a pistol-packing fighter. That’s why she draws the crowds and (as she puts it) “energy” that otherwise elude the angry McCain. But she is still the candidate for vice president, not president. Americans do not vote for vice president.

So how can a desperate G.O.P. save itself? As McCain continues to fade into incoherence and irrelevance, the last hope is that he’ll come up with some new game-changing stunt to match his initial pick of Palin or his ill-fated campaign “suspension.” Until Thursday night, more than a few Republicans were fantasizing that his final Hail Mary pass would be to ditch Palin so she can “spend more time” with her ever-growing family. But the debate reminded Republicans once again that it’s Palin, not McCain, who is their last hope for victory.

You have to wonder how long it will be before they plead with him to think of his health, get out of the way and pull the ultimate stunt of flipping the ticket. Palin, we can be certain, wouldn’t even blink.

– Sports News: The Dodgers eliminate the Cubs, so it will be 101 years since they last won a Series.

– Doonesbury: Winning it this time.