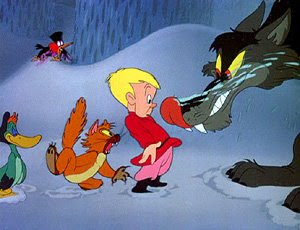 I am one of those people who gets annoyed when someone in a movie or TV show makes a factual error that most people wouldn’t notice… like when they put a front license plate on a car in Florida (Florida only issues a rear license plate) or something like that. C’mon, who cares? But when they get something really wrong, that’s more than annoying.

Case in point: last night I was watching The Mentalist, which is a new series on CBS starring Simon Baker as Patrick Jane, an investigator who uses his brain instead of a gun to solve the mystery. In last night’s episode, one of the suspects in a murder had an alibi for the time of the murder: she was at a concert with her daughter listening to Peter and the Wolf. At one point Mr. Jane asked the suspect, “I can never remember; in Peter and the Wolf, is the duck the flute or the bassoon?” and the suspect replied, “It’s the bassoon.” At the end of the show when the suspect was arrested for the murder, Mr. Jane said that he knew she was lying because, as he said, “the duck is the oboe; the wolf is the bassoon.” Wrong! The grandfather is the bassoon; the wolf is played by the French horns.

Yeah, I know; big deal. But when you pin the entire plot on that little point, you had better get it completely right. And give the horn players their due; from what I hear, the French horn is one of the toughest instruments to play.