NASA has released the first photos of a planet outside of our solar system. 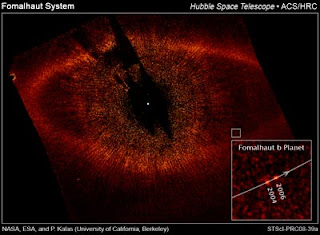 Astronomer Paul Kalas captured the first visible-light images of a planet some 25 light years from our solar system using a camera mounted on the Hubble telescope.

Likely similar in mass to Jupiter, the planet is orbiting the star Fomalhaut in the southern constellation Piscus austrinus at a distance of about four times the distance between Neptune and our sun, said the study’s lead author Kalas, with the University of California, Berkeley.

The research appears in the November 14 online edition of the review Science.

The planet, dubbed Fomalhaut b, could have a system of rings similar in dimension to what Jupiter had in the past, before dust and debris joined together to form its four main moons.

Twenty-five light years makes them right around the corner in terms of galactic dimensions. That means that if there’s any kind of life on Fomalhaut b, they’re listening to our music and watching our TV from 1983. Yeesh, I hope they don’t decide to invade us as payback for Prince and Manimal.

But hey, maybe we could send Rush Limbaugh there as our ambassador. After all, from one gas giant to another…