Some people were chanting “John McCain! Not Hussein!” at a Sarah Palin rally here in Florida.

After the rally in Florida ended, two of the people leading the chant explained why they did so.

“Because it rhymes,” said Shirley Mitten, 64, a volunteer at a pregnancy center and a resident of Brooksville, Fla.

She said she does not know if Mr. Obama is a Muslim. “He says he’s not, but we have no way of knowing,” Ms. Mitten said.

Her husband, John A. Mitten, 64, took credit for starting the chant. “I was trying to get it going!” he said. “I just do not want Obama to be elected.”

Mr. Mitten said he could not trust Mr. Obama because of his past association with William Ayers, the 1960’s radical, and because of his relationship with the Rev. Jeremiah A. Wright Jr. He also pointed out that Mr. Obama’s father was a Muslim.

The middle name Hussein, he said, added to the suspicion. “I guess Obama was named after Saddam Hussein,” he said.”

Just as John Sydney McCain was named for Sydney Greenstreet, the well-known character actor who often played a villain in the movies. 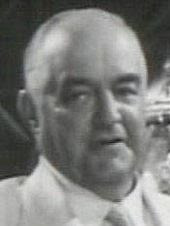 The resemblance is remarkable.

John Stuart Mill once said, “Conservatives are not necessarily stupid, but most stupid people are conservatives.”