– It’s Over. Just as one season — the holidays — begins, another ends: the hurricane season. South Florida dodged the bullets; we haven’t had a major hit in three years.

Despite a few close calls and a drenching from Tropical Storm Fay, Florida escaped the season mostly unscathed. Our Caribbean neighbors were less fortunate, with Cuba and Haiti getting pounded by a succession of major hurricanes.

”This will probably go down as a nonmemorable year for Florida and a catastrophic year for Haiti and Cuba,” National Hurricane Center Director Bill Read said. ”But we came very close here a couple of times. Any small change in steering currents could have brought us a direct hit.”

As it turned out, Florida’s only direct hit came from Fay, a meandering, wet mess that flooded parts of Central and North Florida during its mid-August trek across the state.

Fay made history for being the first Atlantic tropical storm to make four separate landfalls in Florida: on Aug. 18 in Key West, Aug. 19 in Cape Romano, Aug. 21 in Flagler Beach and Aug. 23 in Carrabelle.

A major hurricane hasn’t struck Florida since Hurricane Wilma in 2005, but Read said he isn’t worried that the state has let its guard down. He pointed to Hurricane Ike, which had South Florida squarely in its cross hairs in early September before veering away on a more southerly path through Cuba.

This isn’t to say that we haven’t had tropical events between December and June, but at least the only big one we can count on is the influx of snowbirds from the north for the winter. Or can we?

– Losing It. The economy of Florida is slowing, which means less income for everyone.

For the dozen state economists huddled around a table this month to fine-tune Florida’s annual revenue forecast, something was different and disturbing.

Their projections from just a year ago were way off. Their new math: In the next four years, the state will take in $31.4 billion less in taxes than expected. That’s more than four times the size of the annual Miami-Dade County budget, the equivalent of building about 61 retractable-roof stadiums for the Florida Marlins, and almost half of this year’s state budget.

The free fall in revenue that the economists saw Nov. 21 was not as shocking as what caused it: For the first time in decades, fewer people were moving to the state. Florida’s legendary growth machine had ground to a halt, compounding the troubles brought on by the global recession.

For years, governors and legislators relied on population growth to create jobs, avoid tax increases and shield the state from recession. They saw Florida’s population swell by 2 to 3 percent a year, enough to add a city the size of Miami or Tampa each year. By marketing itself as a low-tax, low-cost retirement haven, Florida literally bet its future on growth.

Every few years, an event would expose weaknesses in Florida’s economic system: a recession in 1991, a school overcrowding crisis in 1997, a steep drop in tourism after the terrorist attacks of Sept. 11, 2001. But the growth machine always roared back to life — until now.

With the mortgage crisis, credit crunch and flat-lining of population, the twin industries that buffered Florida through two previous recessions — real estate and construction — are weighing down Florida’s economy, complicating a recovery and making it likely that Florida will be among the last to bounce back.

”This recession is not only going to be bad for us. It’s going to be worse than the nation’s,” said David Denslow, a University of Florida economist. The primary reason: Florida’s residential construction boom grew at twice its normal rate and ”we got overbuilt.”

The backlog of unsold homes nationwide, coupled with the credit crisis, makes it almost impossible for Florida to lure people from other states when they can’t sell their homes, Denslow said. At the same time, cuts in property taxes and a deepening state budget shortfall squeeze basic public services, making the state less appealing to retirees.

State economists predicted this month that the recession will linger throughout next year, with a gradual return to very slow growth in employment and population in 2010.

The pessimism of the revenue experts, however, stands in stark contrast to the optimism of Gov. Charlie Crist, who said, after economists completed their latest forecast: ”Florida will probably come out of it first. I mean, the sun always comes up in Florida first.”

You know what the Legislature wants to do, don’t you? Cut more taxes.

– No Case. Fred Grimm says the anti-gay adoption folks have no case. 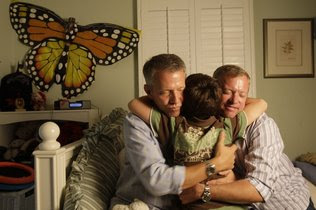 None of the ignominious arguments mounted by the Florida attorney general’s office circumvents the cold reality of 3,535.

At last count, 3,535 children languished in state custody in need of adoptive parents. Yet the attorney general’s office defended a law prohibiting gay adoption as if Florida faced a stark choice between ”homosexual behaving” parents and households of the Ozzie and Harriet kind.

In Florida, 3,535 foster kids wonder what the hell happened to Ozzie and the Mrs.

The attorney general’s lawyers know Ozzie’s a no show. But they’d rather consign foster kids to the perpetual custody of an overwhelmed, underfunded, scandal-racked bureaucracy than admit to the underlying fallacies of the anti-gay adoption law.

They’re not only defending unfounded discrimination against gays. They’re perpetuating an unconscionable transgression toward foster children.

Miami Circuit Judge Cindy Lederman found that 30 years of research has undercut the premise of the 1977 law. In her summary of facts, Lederman said, “Based on the evidence presented from experts from all over this country and abroad, it is clear that sexual orientation is not a predictor of a person’s ability to parent. Sexual orientation no more leads to psychiatric disorders, alcohol and substance abuse, relationship instability, a lower life expectancy or sexual disorders than race, gender, socio-economic class or any other demographic characteristic.”

But her decision Tuesday finding the law unconstitutional wasn’t about gay rights. It was about the rights of foster children to ”permanently and legally share the emotional, psychological and familial bonds of parentage.”

Lederman did it for the kids.

The state’s lawyers, appealing the decision, find themselves in the awkward position of attacking the findings of a judge called the ”leading light” in children’s law by Bernard Perlmutter, director of the Children & Youth Law Clinic at the University of Miami. Perlmutter talked about her national reputation and heroic stature among child advocates as the nation’s “preeminent activist judge.”

He said, ”She’s known far and wide, not just in Florida, for putting children first.”

No one in state government can match Lederman’s gravitas as a champion of children’s rights. Yet, the state’s lawyers must now pretend that this same judge has undermined the welfare of children.

During the trial, the state’s lawyers, desperate for scientific testimony to support an unscientific argument, brought in a retired professor armed with Bible-based theories and disreputable studies who, in a bizarre aside, mentioned that he would not only prohibit gays from adopting, but American Indians too.

The state paid for an academic homophobe and got itself a racist in the bargain.

– The Old Red Car That’s Not Really Green. East Germany’s venture into the automobile business left us with a reminder that your old Pinto rusting in the backyard wasn’t really all that bad. 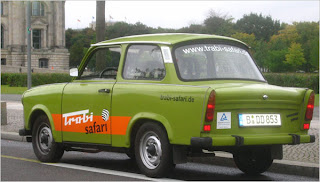 Ostensibly, there’s not a whole lot to love about a car that creaks like an out-of-warranty pirate ship and spews more smoke than a Winston Churchill-Fidel Castro summit could have produced. Yet, somehow, the Trabant I drove here recently has a primitive charm — along with an aroma of burning oil and smoldering brakes.

There are several ways to tour Germany’s capital city: by foot, tour bus, taxi, bicycle or the U-Bahn subway system. But, for those who want to steep themselves in cold war history, a Trabant transports you to the 1960s.

While Saabs were “born from jets” and Jaguars were “born to perform,” Trabants were born out of desperation. From 1957 to 1991, as West Germany made BMWs, Porsches and Mercedes-Benzes, East Germany took the road less traveled.

Because the economy was so bereft, the communist government decided to convert a plant that made motorcycles and tractors into a car factory. Thus was born the Trabant, a symbol for the failings of state-supervised industry. The body was made of plastic and the car plodded along with a 26-horsepower 500-cubic-centimeter 2-stroke 2-cylinder engine.

By East German standards of the time, the price, about $3,000, was not cheap. And although the car cost about a year’s salary, it still was not easy to obtain — after placing the order, an owner could wait 15 years for delivery.

Demand for the Trabant (and for the Wartburg, another woeful East German car) ended once the Berlin Wall came down and East and West were reunified. Easterners were then free to buy Western vehicles, and Trabant sales collapsed.

Today, there are collector rallies and Trabi clubs in Europe and North America, but I did not see any Trabants in the German cities I visited this fall. Which is what makes my driving one through Berlin so special.

The good news is that the Trabant is twice as powerful as a Sears Craftsman two-stage snow blower; the bad news is that it’s twice as loud. It is also not easy to shift.

In fact, not much is easy on a Trabant. The wheel wells could hide pregnant bulldogs. Two knobs the size of Captain Kangaroo’s buttons control the heat and the windshield wipers, which are slower than a stretching class on a senior citizens’ cruise. The tachometer is a series of green and yellow lights with no numbers. The needle on the speedometer (which optimistically goes to 75 m.p.h.) bounces as if it’s auditioning for the Richter scale.

The column-mounted manual shift is a puzzle. It is moved down for first and up for second, then a return to neutral to push in the lever and then down again for third and up for fourth. For reverse, it’s a return-to-neutral-and-push-all-the-way-in-and-down maneuver.

There is no fuel gauge.

The interior of my car had tan and rose-colored vinyl and cloth, and the exterior paint was what Trabant called Frog Green; an appropriate name would have been Gulag Green.

– Doonesbury: Watch out for the bus.