– Standing Up for Equality: A lot of people in South Florida made their voices heard in support of gay rights. 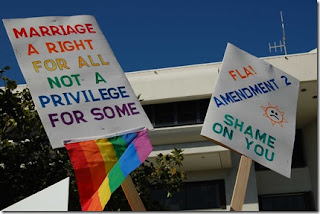 More than 1,500 people in Miami Beach and Fort Lauderdale joined voices across the nation in protest, declaring the fight for same-sex marriage was not over.

”Hey, hey! Ho, ho! Homophobia’s got to go!” an enthusiastic crowd of 500 chanted at Miami Beach City Hall while passing cars behind them honked in solidarity.

The protests were part of the Join the Impact campaign, organized just this week through social networking websites such as Facebook and MySpace. The goal was to have a synchronized reaction of outrage across the country to the passage of laws in Arizona, California and Florida defining marriage as an institution between a man and a woman only.

More than one million people across the world were expected to participate in similar protests.

For many in the crowd at Miami Beach, the names of those laws — Proposition 8 in California, Amendment 2 in Florida — have become a symbol of the struggle for gay, lesbian, bisexual and transgender rights. They also argue the laws will restrict rights to heterosexuals who are domestic partners and not married.

HIV advocate Priscilla Reyes, who attended the Fort Lauderdale rally, worried the law will restrict partners from having access to the medication and healthcare they need. A vote shouldn’t affect anyone’s ability to afford treatment, she said.

”I don’t think the majority of people should decide on the minorities’ rights,” she said.

Fort Lauderdale mayoral candidate Dean Trantalis, who is openly gay, spoke of the alienation of the gay community. ”This is a slap in the face for everyone seeking equal rights, especially because [the ban] came at a time for change in our country,” said Trantalis, speaking of the presidential election of Barack Obama.

In both places, crowds of all ages and races championed similar philosophies. They also questioned what the next move for local gay rights activists and supporters should be.

”It’s hard to say now, honestly,” said Jim Jennings, a 43-year-old real estate agent from Miami. ”But I think every little bit helps. And protesting may be what’s necessary for people to really understand just what’s going on and what’s being taken away.”

Jennings stood amid a colorful array of signs that read, ”Marriage is a right for all, not a privilege for some,” ”Straight Christian for Gay Rights,” and ”Get Your Church Out of My State.”

The protests had particular meaning in Miami Beach and Fort Lauderdale — two cities known for having large gay populations. More than 300 couples are registered as domestic partners on Miami Beach, which has some of the broadest domestic partnership laws in the country.

”South Florida can be the example,” said Babak Movahedi, chairman of Miami Beach’s gay business development committee. “Dare I say it, if marriage rights were up to cities and not the state, I think we would have gay marriage here.”

Speaking to the crowd, Movahedi told them to look at Nov. 4 as a day of inspiration, not disappointment.

”Let’s not place blame on each other about the passage of Amendment 2,” Movahedi said. “Let’s move forward . . . We can change things through the power of numbers. That’s how Barack Obama won, and that’s how we plan to win.”

In response, the crowd began to chant, ”Yes we can! Yes we can!”

More pictures from the marches can be seen here, here, and here at Steve Rothaus’s blog Gay South Florida.

– Off Line: Barack Obama will have to give up his BlackBerry once he’s sworn in. 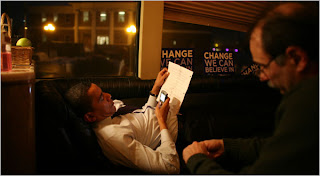 Those are seven words President-elect Barack Obama is dreading but expecting to hear, friends and advisers say, when he takes office in 65 days.

For years, like legions of other professionals, Mr. Obama has been all but addicted to his BlackBerry. The device has rarely been far from his side — on most days, it was fastened to his belt — to provide a singular conduit to the outside world as the bubble around him grew tighter and tighter throughout his campaign.

“How about that?” Mr. Obama replied to a friend’s congratulatory e-mail message on the night of his victory.

But before he arrives at the White House, he will probably be forced to sign off. In addition to concerns about e-mail security, he faces the Presidential Records Act, which puts his correspondence in the official record and ultimately up for public review, and the threat of subpoenas. A decision has not been made on whether he could become the first e-mailing president, but aides said that seemed doubtful.

For all the perquisites and power afforded the president, the chief executive of the United States is essentially deprived by law and by culture of some of the very tools that other chief executives depend on to survive and to thrive. Mr. Obama, however, seems intent on pulling the office at least partly into the 21st century on that score; aides said he hopes to have a laptop computer on his desk in the Oval Office, making him the first American president to do so.

Diana Owen, who leads the American Studies program at Georgetown University, said presidents were not advised to use e-mail because of security risks and fear that messages could be intercepted.

“They could come up with some bulletproof way of protecting his e-mail and digital correspondence, but anything can be hacked,” said Ms. Owen, who has studied how presidents communicate in the Internet era. “The nature of the president’s job is that others can use e-mail for him.”

Should Mr. Obama want to break ground and become the first president to fire off e-mail messages from the West Wing and wherever he travels, he could turn to Al Gore as a model. In the later years of his vice presidency, Democrats said, Mr. Gore used a government e-mail address and a campaign address in his race against Mr. Bush.

The president, though, faces far greater public scrutiny. And even if he does not wear a BlackBerry on his belt or carry a cellphone in his pocket, he almost certainly will not lack from a variety of new communication.

On Saturday, as Mr. Obama broadcast the weekly Democratic radio address, it came with a twist. For the first time, it was also videotaped and will be archived on YouTube. 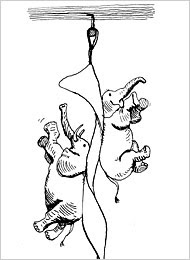 ELECTION junkies in acute withdrawal need suffer no longer. Though the exciting Obama-McCain race is over, the cockfight among the losers has only just begun. The conservative crackup may be ugly, but as entertainment, it’s two thumbs up!

Over at Fox News, Greta Van Susteren has been trashing the credibility of her own network’s chief political correspondent, Carl Cameron, for his report on Sarah Palin’s inability to identify Africa as a continent, while Bill O’Reilly valiantly defends Cameron’s honor. At Slate, a post-mortem of conservative intellectuals descended into name-calling, with the writer Ross Douthat of The Atlantic labeling the legal scholar Douglas Kmiec a “useful idiot.”

In an exuberant class by himself is Michael Barone, a ubiquitous conservative commentator who last week said that journalists who trash Palin (more than a few of them conservatives) do so because “she did not abort her Down syndrome baby.” He was being “humorous,” he subsequently explained to Politico, though the joke may be on him. Barone writes for U.S. News & World Report, where his 2008 analyses included keepers like “Just Call Her Sarah ‘Delano’ Palin.” Just call it coincidence, but on Election Day, word spread that the once-weekly U.S. News was downsizing to a monthly — a step closer to the fate of Literary Digest, the weekly magazine that vanished two years after its straw poll predicted an Alf Landon landslide over Franklin Delano Roosevelt in 1936.

Will the 2008 G.O.P. go the way of the 1936 G.O.P., which didn’t reclaim the White House until 1952? Even factoring in the Democrats’ time-honored propensity for self-immolation, it’s not beyond reason. The Republicans are in serious denial. A few heretics excepted, they hope to blame all their woes on their unpopular president, the inept McCain campaign and their party’s latent greed for budget-busting earmarks.

The trouble is far more fundamental than that. The G.O.P. ran out of steam and ideas well before George W. Bush took office and Tom DeLay ran amok, and it is now more representative of 20th-century South Africa during apartheid than 21st-century America. The proof is in the vanilla pudding. When David Letterman said that the 10 G.O.P. presidential candidates at an early debate looked like “guys waiting to tee off at a restricted country club,” he was the first to correctly call the election.

The good news for Democrats is a post-election Gallup poll finding that while only 45 percent of Americans want to see Palin have a national political future (and 52 percent of Americans do not), 76 percent of Republicans say bring her on. The bad news for Democrats is that these are the exact circumstances that can make Obama cocky and Democrats sloppy. The worse news for the country is that at a time of genuine national peril we actually do need an opposition party that is not brain-dead.

– What Were They Thinking? Looking back thirty years to the colossal disaster that was The Star Wars Holiday Special. 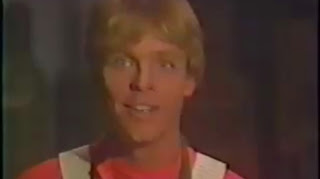 On Nov. 17, 1978, the “Star Wars” universe was rocked by a disturbance in the Force more calamitous than the destruction of Alderon, more catastrophic than the Clone Wars, and more devastating than the introduction of Jar Jar Binks. It was “The Star Wars Holiday Special” (or “TSWHS”), a two-hour prime-time special on CBS, in which two worlds collided: “Star Wars” and the traditional television variety show. If you have a bad feeling about this, you aren’t alone.

“TSWHS” was broadcast only once, but that was enough to secure its place as both “Star Wars’ ” and television’s guiltiest of pleasures. George Lucas (who declined to be interviewed for this story) has disavowed it. David Hofstede ranked it No. 1 in his book “What Were They Thinking: The 100 Dumbest Events in Television History.” A seemingly mortified Harrison Ford, appearing last February on “Late Night With Conan O’Brien,” tried to evade his host’s questions about “TSWHS” by stating he had no recollection of it. Then, to freshen up the aging action star’s memory, O’Brien played the clip in which Ford’s Han Solo tells Chewbacca’s clan, “You’re like family to me.”

Even “TSWHS” co-producer Gary Smith, whose more than 40-year Emmy-winning career includes some of television’s most acclaimed variety specials, concedes “TSWHS” was not one (or two) of his finest hours. Never released on home video, “TSWHS” does survive on bootleg videocassettes and on the Internet. A special five-minute version posted on YouTube has received more than 580,400 hits.

The plot of “TSWHS” plays like a demented “SCTV” sketch: A long time ago, in a galaxy far, far away, Han Solo and Chewbacca are racing to Kashyyyk, Chewie’s home planet, in time for them to be with Chewie’s family for the annual Life Day celebration. Chewie’s wife, Malla, his son, Lumpy, and his father, Itchy, anxiously await his arrival, while Imperial Stormtroopers, under direction from Darth Vader, exhibit very un-Life Day behavior, ransacking homes, imposing curfews and shutting down the cantina.

But here’s where it gets weird. Mixed in with all the principals from the original “Star Wars” movie are Bea Arthur singing a Brechtian tune in the cantina; Diahann Carroll entrancing Lumpy as his virtual reality fantasy; and Harvey Korman cooking up an alien Julia Child impersonation.