– Young Man with a Gift: Connor Gifford is a unique historian. 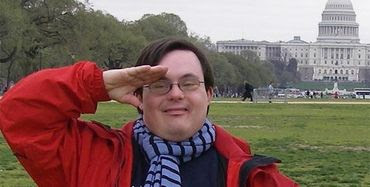 What happens when a 26-year-old man with Down syndrome meets a soon-to-be grandmother close to four decades older than him? In the case of Nantucket residents Connor Gifford and Victoria Harris, a beautiful friendship was born that ultimately changed both their life paths and led to the publication of a book about our nation’s history, “America According to Connor Gifford.”

In the prologue to the book, Gifford thanks God for giving him the gift of Down syndrome, and he explains that after he was born doctors diagnosed him with mosaic Down syndrome.

“I was so blessed, and that’s why I thank God for my gift,” Gifford says. “I am sensitive to things like you don’t mistreat somebody who is, let’s say, black, or Indian, or Mexican. We all have something in ourselves that we can say to the world, ‘Look out world, here I come.'”

That sentiment is certainly coming true for Gifford. “The World According to Connor Gifford” [sic] was released on Nantucket in June and is making its New England debut on this Fourth of July weekend. It already is selling well and getting attention from the national news media. Tim Russert wrote an endorsement of the book and planned to have Gifford on “Meet the Press” before his untimely death. Chris Matthews (a part-time Nantucket resident) of MSNBC’s “Hardball With Chris Matthews” met Gifford and loved the book.

Gifford is a native of Perrysburg, Ohio, where he graduated from high school in 2002. His parents pushed to have him take mainstream classes, and he fell in love with history in the eighth grade. He now lives year-round on Nantucket.

Harris’ background is in documentary filmmaking, and she’s the founder of the Harris Group, which creates Fortune 500 branding campaigns. She was working on a first novel when she met Gifford.

In a telephone interview, Harris and Gifford, each on a different extension, explained how the book came to be.

The two met at Harris’ daughter’s house on Nantucket in January of 2007.

“Connor and I just really liked each other right off the bat,” Harris says. “We got talking about history, and I realized there was this very profound sense of the essence of who we are as a nation in this young man’s mind.”

Harris went home to Rochester, N.Y., but she could not stop thinking about the conversation. By summer, she knew she wanted Gifford to write a book, and she created the concept of “America According to Connor Gifford.” She didn’t have any idea what the book would look like, or even be about, but she called his parents, Julie and Chuck Gifford, and asked if she could interview their son about his thoughts on history.

“I felt deeply that the knowledge that was in Connor’s mind, that he couldn’t necessarily express in the traditional way that somebody sits down and writes a book, could be released if I could interview him,” Harris says.

The interviews continued through the fall, and as Harris transcribed hundreds of hours of interviews she began to see patterns in Connor’s thinking. What emerged was a profound sense of civil rights. She also realized that Connor could express history best through people and events that he thought we all should know, such as Anne Hutchinson, Benjamin Franklin, the Declaration of Independence, the Bill of Rights, our westward expansion and Jim Crow laws. It was a natural development of Gifford’s personal feelings about history.

“My love for history started in eighth grade,” Gifford says, “and as I went through history, I realized that what these people were doing was touching my heart.”

Since that article was published in July, Connor’s book has taken off and he’s on a book tour, including a trip back to his hometown of Perrysburg. (See video here.) Full disclosure: I’ve known Connor’s father, Chuck Gifford, since I was five years old, and his family lived next door to me as I was growing up. I see that Connor has inherited his dad’s sense of humor and love of history, and I admire him for his accomplishment. What a great story.

– How Barack Obama Won Florida: The Miami Herald has the inside story of the strategy that won the state for Mr. Obama. 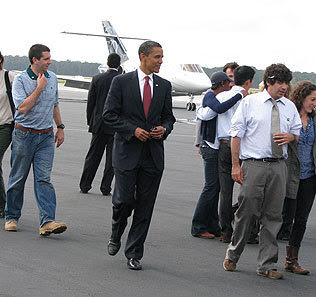 TAMPA — Inside a converted cigar factory in the heart of Ybor City, a group of Barack Obama staffers hunch over laptops in intense, nearly silent concentration. This is the nerve center of Obama’s Florida operation, and the election is four days away.

Steve Schale, 34, Obama’s state director and the brain behind the state campaign, glances across rows of lawyers, researchers, communications staffers and field directors working on the campaign’s final-hours effort to get out the vote.

He has scratched out a prediction on a piece of paper: Obama takes Florida, 50 percent to 46 percent. But the crumpled scrap he carries belies his greatest fear — that the Illinois senator loses Florida, and in doing so, the White House.

In the preceding four months, the campaign registered 200,000 new voters in Florida, opened 50 state field offices, recruited 600,000 volunteers, and allocated $40 million to fight John McCain. Under Schale’s direction, it built a grass-roots organization so far-reaching that even Republican strategists say it will change the way politics is practiced in Florida.

(The Miami Herald requested behind-the-scenes access to both camps in the final days of the Florida campaign, in hopes of telling the inside story from whichever side was victorious. The McCain campaign declined. The Obama campaign agreed, as long as it was understood the story wouldn’t appear until after the election.)

For Schale, the waning days of the campaign have come down to this: ”We have tried to anticipate anything and everything, and we don’t take a damn thing for granted.”

Obama’s Florida strategy was thorough and simple: Ask every supporter to help, give every volunteer a job, register every eligible voter, get ”sporadic” voters to the polls, and reach every pocket of the state.

The campaign divided the state into five regions, or ”pods,” each with its own staff and message geared to regional concerns. It harnessed social networking on the Internet and cellphones to allow grass-roots organizers to set up voter registration drives, home-grown phone banks and text-messaging chains.

”If this works, it’s hard to think this isn’t the academic model of the future,” Schale muses on the Saturday before Election Day. ”We started out with the premise that, with our volunteer numbers, there was no reason we couldn’t organize anywhere in Florida.”

Schale’s view of the state is shaped by two years as political director for House Democrats, during which he helped reverse the party’s decline by wresting nine legislative seats from Republican control.

Now Schale, who grew up in St. Augustine, wants to exorcise the demons of Florida’s troubled election history, including the 2000 recount debacle that gave George W. Bush the White House. He says he never again wants Florida to become ”the punching bag of the nation.” 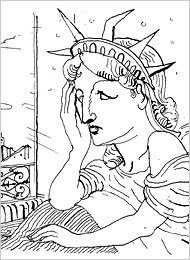 ON the morning after a black man won the White House, America’s tears of catharsis gave way to unadulterated joy.

Our nation was still in the same ditch it had been the day before, but the atmosphere was giddy. We felt good not only because we had breached a racial barrier as old as the Republic. Dawn also brought the realization that we were at last emerging from an abusive relationship with our country’s 21st-century leaders. The festive scenes of liberation that Dick Cheney had once imagined for Iraq were finally taking place — in cities all over America.

For eight years, we’ve been told by those in power that we are small, bigoted and stupid — easily divided and easily frightened. This was the toxic catechism of Bush-Rove politics. It was the soiled banner picked up by the sad McCain campaign, and it was often abetted by an amen corner in the dominant news media. We heard this slander of America so often that we all started to believe it, liberals most certainly included. If I had a dollar for every Democrat who told me there was no way that Americans would ever turn against the war in Iraq or definitively reject Bush governance or elect a black man named Barack Hussein Obama president, I could almost start to recoup my 401(k). Few wanted to take yes for an answer.

So let’s be blunt. Almost every assumption about America that was taken as a given by our political culture on Tuesday morning was proved wrong by Tuesday night.

The actual real America is everywhere. It is the America that has been in shell shock since the aftermath of 9/11, when our government wielded a brutal attack by terrorists as a club to ratchet up our fears, betray our deepest constitutional values and turn Americans against one another in the name of “patriotism.” What we started to remember the morning after Election Day was what we had forgotten over the past eight years, as our abusive relationship with the Bush administration and its press enablers dragged on: That’s not who we are.

So even as we celebrated our first black president, we looked around and rediscovered the nation that had elected him. “We are the ones we’ve been waiting for,” Obama said in February, and indeed millions of such Americans were here all along, waiting for a leader. This was the week that they reclaimed their country.

IS David Cromer the most talented theater director that Americans have never heard of?

Er, silly question, I know. Most Americans could not name a single theater director, talented or not, Tony-laureled or obscure, unless a nephew, daughter or second cousin happens to be one. But Mr. Cromer has a low profile even among the theater cognoscenti in New York, because he has worked for the last two decades in Chicago, mostly at the kind of small, funky spaces that seem to take root in almost every neighborhood in this theater-rich city.

As the first fingers of a chilly Midwestern winter began to tickle noses, Mr. Cromer was seemingly omnipresent on the small-theater scene here. By night he was playing the Stage Manager in his freshly reimagined production of “Our Town,” a smash for the Hypocrites theater troupe last season, which returned for an encore run this fall at the enchantingly funky Chopin Theater in the Wicker Park neighborhood. During the day Mr. Cromer was in rehearsals directing a new play, “Celebrity Row” by Itamar Moses, at the American Theater Company.

And out in the suburb of Glencoe, north of Chicago, at the Writers’ Theater, Mr. Cromer’s evocative staging of William Inge’s “Picnic” was earning rapturous notices. “It is one of the best performances of anything — and I mean anything, not just plays — that I’ve seen in my life,” Terry Teachout wrote in The Wall Street Journal. “This is a destination show, worth traveling any distance to see.”

The roaring Broadway success of “August: Osage County,” which began life here at the Steppenwolf Theater Company and opens at the National Theater in London this month, has rekindled the Chicago-New York theater connection. Coincidentally the Chicago Shakespeare Theater picked up the regional Tony Award this year. (This is the only city that is home to four companies that have been given that laurel; the Steppenwolf, the Goodman Theater and the Victory Gardens Theater are the others.) But the city really is most notable for the health and variety of its smaller theaters, making it possible for directors like Mr. Cromer, and scads of talented actors, to forge careers — perhaps more artistically rewarding than financially remunerative — without leaving town.