As the hours tick down to midnight — when I’ll probably be asleep — I can’t help but look back over the year and think about what a wild ride it’s been, both in good ways and bad, and realize what blessings and good things I have to appreciate.

Mercifully — for you — I don’t need to go into all the details, because, if you’ve been reading this blog, you know most of what happened: the production of my play in New York, the loss of my beloved Mustang, the forced move to a new house, my change in my job, my trips to the Inge Festival and to Stratford… and all the little things in between that make up my rather ordinary life. But through it all, I have come to rely on and appreciate the people who made those good things happen and who helped me through the rough times. So in no particular order I thought I’d take a moment and indulge in a little public appreciation of them. Some I can’t name because I respect their privacy, but I think I can give them enough clues that they will know who they are and know how much they mean to me. 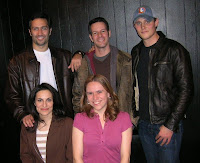 The cast and crew of Can’t Live Without You and the people at Manhattan Repertory Theatre made my dream come true. Rachel Charlop-Powers, who produced it with such drive and ambition and played Anna; Tom Pilutik as Donny; Gary Mahmoud as Nick; Mary Fassino as Barbara; and Will Poston, who became Bobby; Adam Natale, who directed it with the care and humor that I heard in my head as I wrote it and who treated the script with the respect that a writer dreams of; thank you all.

It was, to say the least, an interesting year for me at work, and since I make it a rule never to write about my job, I will leave it at that… except to say that if you’ve been following the state of public education in Miami-Dade County, you know what I’m talking about. To all the people I work with, especially MF, IRMC, CB, ML, LM, MR, AR, VB, LS, MS, AN, and especially Beantown Girl, thank you for everything. I was right; it was not goodbye, it was just intermission.

One of the things that never ceases to amaze me is the incredible friends I’ve made whom I’ve never met in person. The on-line community of the blogosphere has opened up an amazing — and often eye-opening — world, and I am appreciative of the people who have welcomed and encouraged me to participate. Thanks to the generosity of Melissa McEwan at Shakesville, Kenneth Quinnell at FPC, Michael J.W. Stickings at The Reaction, and a lot of other bloggers — too numerous to mention — who support this effort. Without them, I’d be just a guy at a computer. (But no Cheetos.)

When I had to move last spring, I knew I could call on someone who could help me out with grace, charm, and a keen eye for what I was looking for and could afford. She’s been a friend from long before I started looking for a place to live; in fact, she was one of the first friends I made when I moved here in 2001, and I cherish her wit and embrace. Thank you, Margaret; you found me a home. 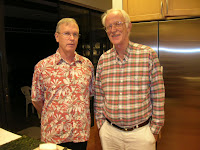 I can’t get through this without thinking of my close friends here, Bob and the Old Professor, who are as close as I come to having real family here. As most of you know, OP was my professor at the University of Miami when I was all of 19 and a freshman, and he — to his undying regret, I’m sure — cast me in my very first play in college, The Beaux’ Stratagem, playing the first of many “The” roles, as in “The Thief” and “The Priest.” (It wasn’t until I was in grad school that I got to play characters with real names…and by then I was writing plays.) Now, nearly forty years later, we are still close and still can spend hours talking about everything from playwriting to great memories at Stratford. And through him, I got to know Bob. Coincidentally — or not — Bob and I shared an office together for four years where we set new standards for jokes and one-liners, and we also share our love of antique cars, which has been both a joy and an obligation we have come to appreciate. Thank you both for everything: Friday night dinners, the occasional Sunday meat loaf, a shared affinity for teasing Skitz the cat, and all the millions of things that make friendship what it is and my life better because of it. 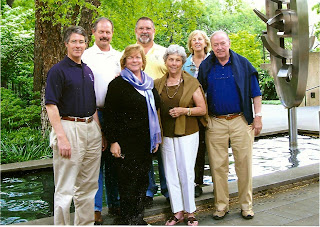 And there’s my family. Distant though they may be, I am still blessed with the good health and ever-present love and bond with my parents who this year celebrated 60 years of marriage and are looking forward to many more years of being the rock of foundation of an ever-growing family, scattered all over the country from Miami to Seattle. And I am thankful to have the love and counsel of my brothers and sister who touch me in their own ways and never know how much a part of me they truly are.

Finally, of course, there’s You, dear Reader. If you’ve gotten this far in this maudlin parade of sentiment, I truly appreciate your thoughts, your best wishes, your comments, even your brickbats, japes, snark, corrections, and the occasional OFFS and WTF? Thanks. You keep me writing, you keep me honest, and you keep reminding me that it’s you I’m writing to … and for.

I’ll leave you tonight with this recollection of the music of Dan Fogelberg and wish you all good memories of auld lang syne.