December 12, 2000: The Supreme Court ruled in favor of George W. Bush’s appeal to stop the vote counting in Florida, basically handing him the presidency.

Talk about a “day which will live in infamy.”

The Onion, however, has some late news. 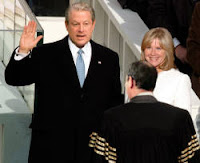 In an unexpected judicial turnaround, the Supreme Court this week reversed its 2000 ruling in the landmark case of Bush v. Gore, stripping George W. Bush of his earlier political victory, and declaring Albert Arnold Gore the 43rd president of the United States of America.

The court, which called its original decision to halt manual recounts in Florida “a ruling made in haste,” voted unanimously on Wednesday in favor of the 2000 Democratic nominee.

“Allowing this flaw in judgment to stand would set an unworkable precedent for future elections and cause irreparable harm to the impartiality of this court,” said Chief Justice John G. Roberts in his majority opinion. “Furthermore, let me be the first to personally congratulate President Gore on his remarkable come-from-behind victory. May he guide us wisely into this new millennium.”

To quote Lord Byron, “And if I laugh at any mortal thing, ’tis that I may not weep.”