There’s a big storm tromping through the Midwest, just in time to snarl holiday travel in Chicago and New York, and certain to bring structural damage to any Muzak system that plays “Winter Wonderland” one time too many in the K Concourse at O’Hare.

A storm gathering strength in the Plains will move rapidly northeastward overnight through Friday.

Overnight heavy snow will be tapering off across southern Wisconsin, northern Illinois and southern Michigan. Snow totals could exceed a foot in a few locations, especially from Milwaukee to the northern suburbs of Chicago.

Significant icing is likely just to the south of I-80 from Iowa to Indiana.

Highs Friday will range from the single digits in North Dakota to the low 60s in southern Kentucky.

A new storm will enter the Midwest Saturday and move to the Great Lakes Sunday with the most significant snow from the Dakotas to Wisconsin and Michigan and rain from the immediate Ohio River Valley into Kentucky.

Look for another invasion of arctic air into the northern Plains and Midwest by the weekend.

But it’s not just the Midwest that’s going to get hit. My brother in Seattle is dealing with a rare heavy snowfall that has the Pacific Northwest under its thumb. The other day in an unrelated story I showed you my patio furniture. Well, here’s what my brother’s looked like as of yesterday: 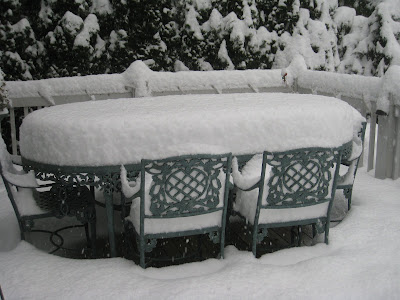 And my sister e-mailed me that her son and his best-beloved are on their way from New Hampshire to Cincinnati for the holidays. Safe travels to them…and to all.