– History in 60 Seconds: The end of the Polaroid era is near. 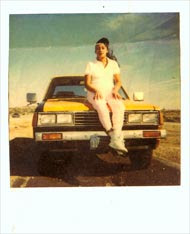 The demise of Polaroid’s instant film cameras has been coming for years. Digital technology did it in. The decision this year by the company that Edwin Land founded to stop manufacturing the film has left devotees who grew up with Polaroid’s palm-size white-bordered prints bereft. They have signed up in the thousands as members of SavePolaroid.com. Digital cameras that print instant pictures have materialized to fill the void, providing a practical substitute. But as in most affairs of the heart, logic is beside the point.

Cold-blooded blogs during the last year have dished about Polaroid’s leaky developers and the impossibility of making copies from instant film prints or of fiddling with them, which, by the way, was precisely why police photographers long ago cottoned to them for crime scenes and mug shots. A friend the other day also complained about how Polaroids often came out yellow and, when left on the rainy porch or stuck onto the refrigerator door along with the shopping lists and report cards, ended up faded and curled.

All true. One is reminded of the pragmatists’ disdain for long-playing records when compact disks arrived. Then D.J.’s and audiophiles revived LPs, in part precisely for the virtues of its inconvenience.

That is to say, LPs, like Polaroids, entailed certain obligating rituals. Igor Stravinsky near the end of his life spent evenings confined to a chair. He listened often to Beethoven. His assistant, Robert Craft, would cue the records up, then, when one side was finished, rise from his seat, carefully flip the vinyl disk over, place the needle at the beginning, and rejoin the composer, a simple act of devotion required by the limits of LP technology, endlessly repeated until it became a routine binding Stravinsky and Craft like father and son.

I can still picture my own father with his Polaroid camera. “Cheese,” he would actually say, and the machine would whir before expelling a print with the negative still attached, requiring the shutterbug to wait a prescribed time before peeling it off. My father would check his watch, shaking the covered snapshot as if the photograph were a thermometer. Then at the right moment, with a surgeon’s delicate hands, he would separate the negative in a single motion and reveal — well, who knew what.

Because that was part of the beauty of the Polaroid. Mystery clung to each impending image as it took shape, the camera conjuring up pictures of what was right before one’s eyes, right before one’s eyes. The miracle of photography, which Polaroids instantly exposed, never lost its primitive magic. And what resulted, as so many sentimentalists today lament, was a memory coming into focus on a small rectangle of film.

Or maybe not. Digital technology now excuses our mistakes all too easily — the blurry shot of Aunt Ruth fumbling with a 3-wood at the driving range; or the one of Cousin Jeff on graduation day where a flying Frisbee blocked the view of his face; or of Seth in his plaid jacket heading to his first social, the image blanched by the headlight of Burt’s car coming up the driveway; or the pictures of you beside the Christmas tree where your hair is a mess.

Digital cameras let us do away with whatever we decide is not quite right, and so delete the mishaps that not too often but once in a blue moon creep onto film and that we appreciate only later as accidental masterpieces. In fact, the new technology may be not more convenient but less than Polaroid instant film cameras were, considering the printers and wires and other electronic gadgets now required, but at this one thing, the act of destruction, a source of unthinking popularity in our era of forgetfulness and extreme makeovers, digital performs all too well. Polaroids, reflecting our imperfectability, reminded us by contrast of our humanity. 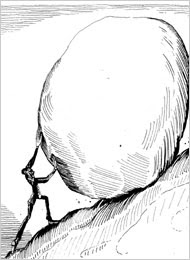 By the historical standards of presidential hubris, Obama’s disingenuous defense of his tone-deaf invitation to Warren is nonetheless a relatively tiny infraction. It’s no Bay of Pigs. But it does add an asterisk to the joyous inaugural of our first black president. It’s bizarre that Obama, of all people, would allow himself to be on the wrong side of this history.

Since he’s not about to rescind the invitation, what happens next? For perspective, I asked Timothy McCarthy, a historian who teaches at Harvard’s Kennedy School of Government and an unabashed Obama enthusiast who served on his campaign’s National Lesbian, Gay, Bisexual and Transgender Leadership Council. He responded via e-mail on Christmas Eve.

After noting that Warren’s role at the inauguration is, in the end, symbolic, McCarthy concluded that “it’s now time to move from symbol to substance.” This means Warren should “recant his previous statements about gays and lesbians, and start acting like a Christian.”

McCarthy added that it’s also time “for President-elect Obama to start acting on the promises he made to the LGBT community during his campaign so that he doesn’t go down in history as another Bill Clinton, a sweet-talking swindler who would throw us under the bus for the sake of political expediency.” And “for LGBT folks to choose their battles wisely, to judge Obama on the content of his policy-making, not on the character of his ministers.”

Amen. Here’s to humility and equanimity everywhere in America, starting at the top, as we negotiate the fierce rapids of change awaiting us in the New Year. 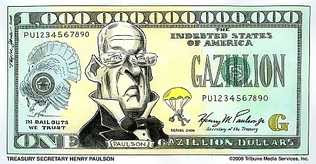 How weird a year was it?

• O.J. actually got convicted of something.

• Gasoline hit $4 a gallon — and those were the good times.

• There were a few days there in October when you could not completely rule out the possibility that the next Treasury Secretary would be Joe the Plumber.

• Finally, and most weirdly, for the first time in history, the voters elected a president who — despite the skeptics who said such a thing would never happen in the United States — was neither a Bush NOR a Clinton.

Of course not all the events of 2008 were weird. Some were depressing. The only U.S. industries that had a good year were campaign consultants and foreclosure lawyers. Everybody else got financially whacked. Millions of people started out the year with enough money in their 401(k)’s to think about retiring on, and ended up with maybe enough for a medium Slurpee.

So we can be grateful that 2008 is almost over. But before we leave it behind, let’s take a few minutes to look back and see if we can find some small nuggets of amusement. Why not? We paid for it…