– The Revolution at 50: The Miami Herald is running a series looking back at the fifty years since Fidel Castro rolled into Havana, and changing two countries — Cuba and the United States. 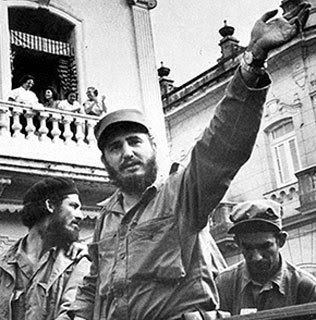 Fifty years ago, an attorney turned bearded guerrilla marched triumphantly into Havana and declared victory over a departing dictator. Then he became a despot himself.

At the same time, Castro launched a massive literacy campaign. The island churned out armies of new doctors. Cuba became an international player, inspiring guerrilla movements and supplying soldiers for ”anti-imperialist” wars around the globe. Castro’s refusal to kowtow to the United States won him praise.

As the Jan. 1 anniversary of the revolution’s triumph approaches, many of the social welfare achievements that were the trophies of the communist regime have rusted. Years of failed economic policy, waves of mass exodus, and Cuba’s inability to recover from the collapse of its patron, the Soviet Union, have dulled Castro’s touted crown jewels — the advances in health and education.

Still, the revolution that ousted Fulgencio Batista and transformed a tropical getaway into a communist state remains one of the Western Hemisphere’s most significant events of the last century.

”The Cuban government is going to celebrate its 50-year anniversary — 50 years of what?” said Andy Gomez, a senior fellow at the University of Miami’s Institute for Cuban and Cuban-American Studies, who left the island in 1960 when he was 6.

”Fifty years of sacrifice and misery?”

In the only communist country in the hemisphere, many would argue that Castro had a single resounding success: staying in power. He built a strong rebel army, never bothered with civic freedoms or presidential elections, and created a vast and powerful state security apparatus that kept watch on literally every block.

His regime reigned over a population that is among the world’s best educated, but many still flee. Every year, about 20,000 are issued permits to resettle in the United States, and each year a nearly equal number risk their lives on dangerous sea voyages.

But if numbers alone could tell this story, Castro met his revolutionary goals — without any meddling from Washington.

Within two years after Castro emerged from the jungle in 1959 to seize control of the island, more than 700,000 Cubans learned how to read, and 25,000 new homes were built. Cuba’s communist revolution would eventually produce so many doctors that last year there was one physician per 155 residents, more than double Florida’s ratio. Before Castro, there was one doctor for every 1,058 people.

But today, almost a quarter of the nation’s doctors are serving ”missions” overseas so the government can collect much-needed hard currency from their work. So many underpaid educators have left classrooms that the school system is relying on teenage interns to teach.

There is no question that Cuba enjoys a low infant mortality rate, high life expectancy, and crime statistics that any Latin American nation would envy. But experts say Castro’s early accomplishments have declined so sharply that only drastic measures can save them.

”They always say the great achievements were healthcare and education, but in Cuba you don’t spend your whole life sick or studying,” said Lizette Fernández, a former banker and dissident who arrived in 2006 and now sells cosmetics in Hialeah. ”If the medical system was an accomplishment, doctors would not be writing prescriptions without any hope that you will find the medicine.” 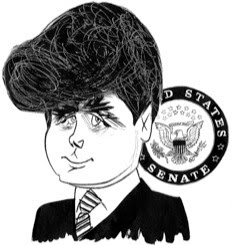 Otto Kerner, Jr., is usually remembered, if he is at all, as the leader of the Kerner Commission, in 1968, which evaluated the riots and other unrest that was then rocking American cities. He was governor of Illinois at the time, and went on to serve as a federal appeals court judge, but his later claim to fame may be of greater historical note. In 1969, he was charged in a corruption case where he and a subordinate received bribes from a racetrack owner in return for an expanded racing schedule. That particular scandal came to light because the owner tried to deduct the value of the bribes on her taxes. Paying bribes to the governor was, in her view, an ordinary business expense in Illinois in the late nineteen-sixties.

So, it appears, even today. In a breathtaking seventy-six-page complaint filed this morning, the current Illinois governor, Rod Blagojevich, and his chief of staff are charged with engaging in a pattern of corruption that suggests that the culture of Illinois has only got worse in recent decades. David Mamet is a dewy-eyed idealist compared with the government lawyers and investigators who chronicled the cynicism and depravity of Blagojevich and his staff. (George Ryan, the governor who was elected before Blagojevich, is currently serving a prison sentence for his role in a more prosaic corruption scandal during his tenure. And Dan Walker, the governor from 1973 to 1977, waited until he left office to engage in the criminal conduct that led to his imprisonment.)

The case against the Governor comes in three parts, each more astonishing than the last. The first, the result of a long-running investigation in the state, charges a fairly routine pay-to-play operation. The Governor is said to have demanded campaign contributions in return for highway contracts and the like. (In a bravura touch, Blagojevich appears to have delayed an addition to a children’s hospital because the sponsors had not paid up.)

The surreal aspects of the case begin with the fallout from the bankruptcy of the Tribune company. The company, which owns the Chicago Cubs, was looking to raise money by selling the team’s home, Wrigley Field, and seeking the assistance of state government in the process. Blagojevich had a condition for giving the help: the newspaper had to fire a group of editorial writers and editors who had been critical of him. In these troubled times for newspapers, it’s cheering, in a way, that the Governor thought that a mere editorial page mattered so much, but his manner of showing his respect seems to owe too much to local custom.

Most attention, of course, will focus on the third aspect of Blagojevich’s scheme: his apparent effort to sell President-elect Barack Obama’s vacated Senate seat, which the Governor had the sole right to fill. It is Obama’s good fortune that the Governor seems to be pretty irritated with Obama’s lack of attention to Blagojevich’s needs. In a soon-to-be famous observation on the tapes, the Governor on Obama’s team: “They’re not willing to give me anything except appreciation. Fuck them.”

– The Perfect Gift: Frank Rich says Gov. Blagojevich is the symbol of all the greed and corruption we’ve become accustomed to. 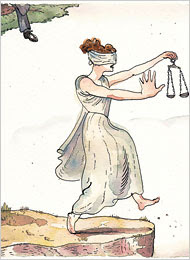 The Republican partisans cheering Fitzgerald’s prosecution of a Democrat have forgotten his other red-letter case in this decade, his conviction of Scooter Libby, Dick Cheney’s chief of staff. Libby was far bigger prey. He was part of the White House Iraq Group, the task force of propagandists that sold an entire war to America on false pretenses. Because Libby was caught lying to a grand jury and federal prosecutors as well as to the public, he was sentenced to two and a half years in prison. But President Bush commuted the sentence before he served a day.

Fitzgerald was not pleased. “It is fundamental to the rule of law that all citizens stand before the bar of justice as equals,” he said at the time.

Not in the Bush era, man. Though the president had earlier vowed to fire anyone involved in leaking the classified identity of a C.I.A. officer, Valerie Plame Wilson — the act Libby tried to cover up by committing perjury — both Libby and his collaborator in leaking, Karl Rove, remained in place.

Accountability wasn’t remotely on Bush’s mind. If anything, he was more likely to reward malfeasance and incompetence, as exemplified by his gifting of the Presidential Medal of Freedom to George Tenet, L. Paul Bremer and Gen. Tommy Franks, three of the most culpable stooges of the Iraq fiasco.

Bush had arrived in Washington vowing to inaugurate a new, post-Clinton era of “personal responsibility” in which “people are accountable for their actions.” Eight years later he holds himself accountable for nothing. In his recent exit interview with Charles Gibson, he presented himself as a passive witness to disastrous events, the Forrest Gump of his own White House. He wishes “the intelligence had been different” about W.M.D. in Iraq — as if his administration hadn’t hyped and manipulated that intelligence. As for the economic meltdown, he had this to say: “I’m sorry it’s happening, of course.”

If you want to trace the bipartisan roots of the morally bankrupt culture that has now found its culmination in our financial apocalypse, a good place to start is late 2001 and 2002, just as the White House contemplated inflating Saddam’s W.M.D. That’s when we learned about another scandal with cooked books, Enron. This was a supreme embarrassment for Bush, whose political career had been bankrolled by the Enron titan Kenneth Lay, or, as Bush nicknamed him back in Texas, “Kenny Boy.”

– Blizzard Warnings:The upper Midwest is looking at some savage winter weather with Bismarck, North Dakota headed for -36 F today and a blizzard warning. 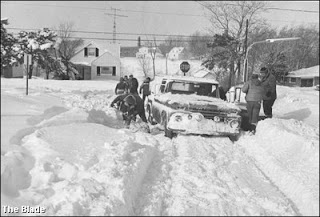 Blizzard Warnings extend from Western Wisconsin into Montana. Winter Storm watches and warnings abound from the West coast to the Plains/Midwest.

The worst conditions, however, will be across the northern Plains as high wind and snow develop eastward from Montana across the Dakotas into northern Minnesota by Sunday morning. Travel is or will become difficult or impossible at times as visibilites drop to near zero in blowing and drifting snow.

Wind chills will plunge to dangerously low levels as actual temperatures spiral down to well below zero across Montana and northwest North Dakota by Sunday morning.

In the Far West, the Portland, Ore., metro area and Willamette Valley are under a winter storm watch with several inches of snow expected for tonight through Sunday.

Salt Lake City is under a winter storm warning. Three to 6 inches of snow are forecast there through tomorrow with substantially more in nearby mountains.

That photo is from the Blizzard of 1978 that struck Toledo and the Northeast, but a blizzard is a blizzard. Meanwhile, it’s going to be sunny and 77 here in Miami, and the hibiscus in the backyard is blooming. 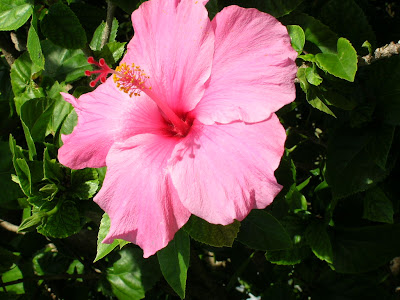 One of the many reasons I like living here.