Here’s what I’ll be doing all weekend: helping put on the classic car show at the annual Art Deco Festival out on Miami Beach. 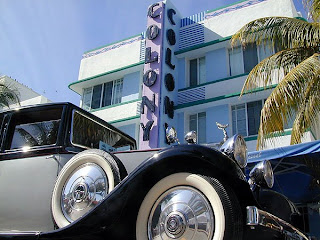 The Argentine link isn’t such a leap.

The festival showcases Argentine films, lectures and entertainment. Plus 12th Street (just west of Ocean Drive) will be transformed into ”Argentine Way” with Latin music, food and flags.

Art Deco brought modern architecture to Buenos Aires along with Miami Beach around the 1930s, but the style disappeared after World War II, said Farkas.

Miami Beach, ”with a little under 800 registered buildings still standing,” has the largest number of Art Deco buildings in the world, he said. ”They didn’t get torn down because there was no economy down here.”

Newcomers won’t remember the grim Miami Beach of the ’70s. Instead of a pastel wonderland, it was the scene of an older, ailing population, cocaine cowboys and a community fighting for economic survival.

”She cooked up this notion of using this festival as a way to attract people down here,” said Farkas, who is retiring after this year’s event. ”It started off small — the first one was almost all indoors — and it’s now in its 32nd year. It just grew and grew and grew.”

We bring up to 100 antique cars to the weekend, starting at 5th Street on Ocean Drive. We’re there for Saturday and Sunday, and we always get a lot of attention, especially when we get some of the winter locals to join in, like last year when Billy Joel came back; he had been a participant the in 2007, too. 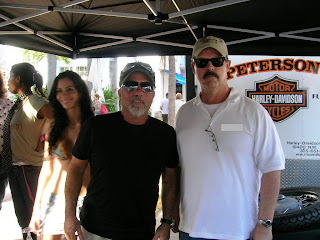 Billy Joel and some guy at Art Deco 2008.
For some reason, we always get a cold front coming through on Art Deco weekend, which makes it nice for being outside all day.

I’ll be handling registration for the car club, so if you come out, stop by and say hi. I’ll put up some pictures later.