Sam Adams is the openly gay mayor of Portland, Oregon. He’s considered a rising star in the political world in the Pacific Northwest. Or he was until it was revealed that he had been dating an 18-year-old kid who was an intern in his office.

At first he denied it, then last week he fessed up. 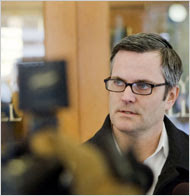 The mayor admitted that he had lied about the affair, had smeared his accuser, and had urged the boy — a kid with the improbable name of Beau Breedlove — to lie as well. He did it all to get elected, he said.

“I want to apologize to the gay community for embarrassing them,” the 45-year-old mayor, now contrite, told his city last week. Three newspapers — including a popular gay paper — called on him to resign.

Sam Adams was the Great Gay hope. Mayor today. Senator tomorrow. And beyond?

“I personally gave Sam Adams my vote, my support, my friendship and my money,” wrote Marty Davis, publisher of Just Out, the city’s gay newspaper. “In return, he took my trust.”

So now, instead of breaking barriers, Sam Adams has stirred old hatreds. Daily, people have gathered outside City Hall to shout at one another and wave placards.

This week, after seven days of soul-searching, the mayor said he would stay on the job, though he faces a criminal investigation by the Oregon Attorney General.

“I know I have let you down,” the mayor said in a videotape message to the city. “And I ask your forgiveness.”

We all know that people, regardless of their sexual orientation, do stupid things. The fact that Mr. Adams is gay doesn’t make him a monster because he had sex with an 18-year-old; it makes him an idiot who thought with the wrong head. And while I don’t condone for an instant what happened between Mr. Adams and Mr. Breedlove, it isn’t because of Teh Gay; it’s because Mr. Adams was his boss and it’s thoroughly unprofessional to fool around with subordinates. No, I’m pissed at both of them — Mr. Breedlove is in on this too — for once again reinforcing the stereotype that all gay men are predators on teenage boys — thank you, Mark Foley — and that we are somehow held to a different standard in terms of our political prospects because of it.

What Mr. Adams did was stupid and possibly criminal — for the lying, at least — but he shouldn’t be banned for life from the political arena any more than if he had been straight and been sleeping with an intern who was of legal age and was female. If a straight man does it, he’s a pig. If a gay man does it, all queers are pedophiles.

I’m not saying Mr. Adams should be given a free pass, but he shouldn’t be banished, either, unless the same punishment is meted out to every man or woman in political life who does the same thing; i.e. Bill Clinton or Newt Gingrich. But what he did doesn’t help the cause of gay equality. I doubt he was thinking about that at the time, but when you’ve made your mark as the mayor of the largest city in America with an openly gay man at its helm, it’s time to learn to think with the right head.