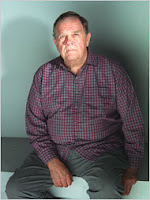 Mr. Hingle first attracted the attention of critics in 1953 when he appeared on Broadway in “End as a Man” as a genial but loutish football player caught up in murky doings at a military academy in the South. Walter Kerr, reviewing the play for The New York Herald Tribune called Mr. Hingle’s performance “first rate.” When the play, by Calder Willingham, was made into a film called “The Strange One” in 1957, Mr. Hingle got the same role and similar notices.

Over the years, he took on a dizzying mix of roles and seemed to do them all with ease and considerable skill. In the 1960s, he played both Hector in “Troilus and Cressida” and Macbeth at the American Shakespeare Festival in Stratford, Conn. He also played the gruff and messy Oscar in “The Odd Couple” on Broadway.

He could be a relatively benign character, like the harness salesman in William Inge’s “Dark at the Top of the Stairs” on Broadway, or a quite sinister one, like the sadistic gangster who stubbed out his cigar on Anjelica Huston’s hand in the 1990 film “The Grifters.” On the other side of the law he was Police Commissioner Gordon in Batman movies, beginning in 1989.

“I can be a truck driver, a doctor, a lawyer, a hanging judge, whatever,” he said in an interview. “And looking like I do has allowed me to make a good living in all kinds of media. It’s a blessing and I’m aware of it.”

Mr. Hingle may be remembered as Commissioner Gordon in the recent Batman films, but he also had a distinguished career on the stage, including creating the title role of Archibald MacLeish’s J.B., a modern retelling of the story of Job.

I had the pleasure of meeting Mr. Hingle at the William Inge Festival in the 1990’s. He and his lovely wife Julie were gracious and warm guests, and I have fond memories of sitting with him at several late-night lobby parties at the Apple Tree Inn where he told stories about working with such luminaries as Raymond Massey and Elia Kazan. We also spent a lot of time that night singing old campfire songs.

My thoughts are with his family.