TPMDC reports that Norm Coleman is so desperate to cling to his Senate seat that he’s trolling on the internet for absentee voters. 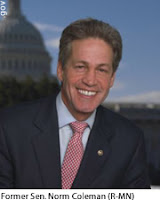 The Coleman camp’s Web site has now published in an easily accessible form the names and home counties of every individual who delivered an absentee ballot and who has not yet been counted. In Hennepin County (Minneapolis), which has its municipalities run elections instead of the county, we are also shown the home towns of the people involved.

“Check below to see if you are one of the thousands of Minnesotans the Franken campaign is seeking to disenfranchise,” the page says. “And please contact us at info@colemanforsenate.com to express your support for our effort to have your vote counted.”

It gets better. By including every last rejected ballot, regardless of backstory or merit, they are including ballots they themselves earlier objected to counting, under the state Supreme Court’s controversial decision that gave the candidates a veto power over improperly-rejected absentees — and they’re now saying it’s the Franken campaign who is disenfranchising these people.

This list includes everyone from Dennis Peterson, who we’d previously reported had his ballot vetoed and kept out of the count by the Coleman camp themselves, to Douglas Thompson, the friendly Coleman witness who admitted that he obtained his ballot through his girlfriend forging his signature on the application.

And remember, the Coleman campaign’s position until the last few weeks was that none of these ballots should ever be counted. It wasn’t until some of the ballots that the local officials had decided were improperly rejected the first time around started coming in, that the Coleman camp started actively looking for voters to put into the count.

Meanwhile, Mr. Coleman is going on Fox News to appeal to “good Americans” to contribute to his campaign so he can overcome the evil alien influence of George Soros, who has an accent, and those dirty effing hippies at MoveOn.org.

At first, Mr. Coleman’s antics as it dawned on him that he lost the race were amusing. Now they’re just… well, sad.