White Like Me — Frank Rich remembers what it was like to grow up in a city that was segregated and now welcomes the presidency of Barack Obama. 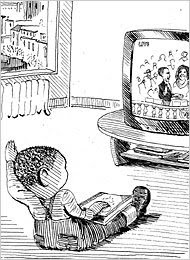 I cannot testify to what black Americans feel as our nation celebrates the inauguration of our first African-American president. But I can speak for myself, as a white American who grew up in the segregated nation’s capital of the 1960s. Barack Obama’s day is one that I never thought would come, and one that I still can’t quite believe is here.

Last week I joined a group of journalists at an off-the-record conversation with the president-elect, a sort of preview of the administration’s coming attractions. But as I walked some desolate downtown blocks to the standard-issue federal office building serving as transition headquarters, ghosts of the past mingled with hopes for the future. The contrast between the unemployed men on Washington’s frigid streets and the buzzing executive-branch bees inside was, for me, as old as time.

My particular historical vantage point is a product of my upbringing as that odd duck, a native Washingtonian whose parents were not in government. The first presidential transition of my sentient lifetime, Kennedy’s, I remember vividly. Even an 11-year-old could see that the sleepy Southern town of the Eisenhower era was waking up, electrified by youth, glamour and the prospect of change.

But some of that change I didn’t then understand. J.F.K.’s arrival coincided with Washington’s emergence as the first American city with a black majority. Many whites responded by fleeing to the suburbs. My parents did the opposite, moving our family from the enclave of Montgomery County, Md., into the city as I was about to enter the fifth grade.

Our new neighborhood included the Sidwell Friends School. My mother, a public school teacher, decreed that her children would instead enroll in the public system that had been desegregated a half-dozen years earlier, after Brown v. Board of Education. In reality de facto segregation remained in place. Though a few African-Americans and embassy Africans provided the window dressing of “integration,” my mostly white elementary, junior high and high schools had roughly the same diversity as, say, today’s G.O.P.

I wish I could say we were all outraged at this apartheid. But we were kids — privileged kids at that — and out of sight was out of mind. Except as household help, black Washington was generally as invisible to us as it was to the tourists who were rigidly segregated from the real Washington while visiting its many ivory marble shrines to democratic ideals.

Gradually we would learn more — from our parents and teachers, from televised incidents of violent racial confrontations far away, and from odd cultural phenomena like the 1961 best seller “Black Like Me.” In that book, a white novelist darkened his skin for undercover travels through deepest Dixie, whose bigotry he then described in morbid firsthand detail to shocked adolescents like me.

Surely such horrific injustices could not occur in our nation’s capital.

Washington is its own special American case, but only up to a point. For all our huge progress, we are not “post-racial,” whatever that means. The world doesn’t change in a day, and the racial frictions that emerged in both the Democratic primary campaign and the general election didn’t end on Nov. 4. As Obama himself said in his great speech on race, liberals couldn’t “purchase racial reconciliation on the cheap” simply by voting for him. And conservatives? The so-called party of Lincoln has spent much of the past month in spirited debate about whether a white candidate for the party’s chairmanship did the right thing by sending out a “humorous” recording of “Barack the Magic Negro” as a holiday gift.

Next to much of our history, this is small stuff. And yet: Of all the coverage of Obama’s victory, the most accurate take may still be the piquant morning-after summation of the satirical newspaper The Onion. Under the headline “Black Man Given Nation’s Worst Job,” it reported that our new president will have “to spend four to eight years cleaning up the messes other people left behind.”

Those messes are enormous, bigger than Washington, bigger than race, bigger than anything most of us have ever seen. Nearly three months after Election Day, it remains astonishing that the American people have entrusted the job to a young black man who seemed to come out of nowhere looking for that kind of work just as we most needed him.

“In no other country on earth is my story even possible,” Obama is fond of saying. That is true, and that is what the country celebrates this week. But it is all the tragic American stories that came before him, some of them still playing out in chilly streets just blocks from the White House, that throw both his remarkable triumph and the huge challenge ahead of him into such heart-stopping relief.

Florida’s Wish List — What the Sunshine State wants from the Obama administration.

Environmentalists are hoping for a new ban on offshore oil drilling. Immigration activists would like to see Haitians get a break from deportations. And everyone wants money.

As Barack Obama prepares to take the oath of office as the 44th president of the United States, expectations among Floridians are soaring.

The wish list is daunting — and some suggest impossible: Everglades restoration projects, green jobs, ”kinder” immigration laws. And a host of cities and counties are elbowing one another to get in line for new roads and mass transit in the proposed $825 billion economic stimulus package.

”This isn’t a time to be modest, it’s time to be bold,” said U.S. Rep. Kathy Castor, a Tampa Democrat and early Obama supporter who says she is already reminding the incoming administration that swing state Florida backed Obama in November. ”States like Florida that have been particularly hard hit by the housing crisis, we’ve got to stand up and advocate for our interests.”

Heckuva Job — Hilzoy looks back at George W. Bush’s first inaugural and compares what he promised and what was delivered.

He’s a small, small man, who ought to have spent his life in some honorary position without responsibilities at a firm run by one of his father’s friends. Instead, he ruined our country, and several others besides. He wasted eight years in which we could have been shoring up our economy, laying the groundwork for energy independence, making America a fairer and better country, and truly working to help people around the world become more free. Instead, he debased words that ought to mean something: words like honor, decency, freedom, and compassion.

To this day, I do not think he has the slightest conception of the meaning of the words he took in vain.