A Teflon Governor — Why is Charlie Crist, halfway through his first term as Florida’s governor and with little to show for it, so popular? 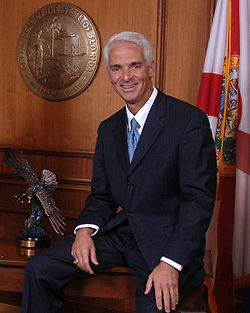 He orchestrated passage of a constitutional amendment mandating the largest property-tax cut in state history. He spent last summer basking in the flattery of rumor as a possible running mate for John McCain, and ended nearly three decades of bachelorhood last month by marrying New York socialite Carole Rome.

And yet, while the public consistently gives him high approval ratings, his policy record after two years on the job is a decidedly mixed bag.

In the past year, Crist promised to send ”a sonic boom” through the economy with the property-tax cut, bring in new revenue with an Indian gambling agreement, cut property insurance rates and create new jobs through accelerated spending on public works programs. In his 2007 inaugural address, he pledged ”secure work with good pay” and ”world-class schools.”

But his promises have gone largely unfulfilled. The national recession converged with Florida’s collapsing housing market to produce the highest unemployment rate in 15 years, the highest job losses of any state, and deep cuts in public education to balance a faltering budget.

The property-tax bonanza has been a dud. The math hasn’t worked as promised on property insurance. The gambling agreement with the Seminole Tribe was ruled unconstitutional. The governor’s pitch to create jobs by accelerating road construction amounted to more show than substance.

It’s because he’s charming, non-confrontational, he avoids speaking out hot-button issues like Amendment 2 until he absolutely has to (and covers himself effectively with moderate talk), and he’s not a Bush. And that sort of politician is becoming very popular now (see Obama, Barack).

Where’s the Outrage? — Frank Rich writes that we have become so used to scandal and fraud that he wonders what it would take to get our attention today. 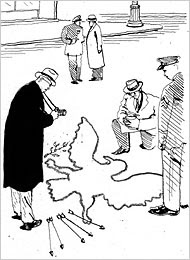 Not even a good old-fashioned sex scandal could get our outrage going again. Indeed, a juicy one erupted last year in the Interior Department, where the inspector general found that officials “had used cocaine and marijuana, and had sexual relationships with oil and gas company representatives.” Two officials tasked with marketing oil on behalf of American taxpayers got so blotto at a daytime golf event sponsored by Shell that they became too incapacitated to drive and had to be put up by the oil company.

Back in the day, an oil-fueled scandal in that one department alone could mesmerize a nation and earn Warren Harding a permanent ranking among our all-time worst presidents. But while the scandals at Bush’s Interior resemble Teapot Dome — and also encompass millions of dollars in lost federal oil and gas royalties — they barely registered beyond the Beltway. Even late-night comics yawned when The Washington Post administered a coup de grâce last week, reporting that Interior Secretary Dirk Kempthorne spent $235,000 from taxpayers to redo his office bathroom (monogrammed towels included).

It took 110 pages for the Center for Public Integrity, a nonpartisan research organization, to compile the CliffsNotes inventory of the Bush wreckage last month. It found “125 systematic failures across the breadth of the federal government.” That accounting is conservative. There are still too many unanswered questions.

Just a short list is staggering. Who put that bogus “uranium from Africa” into the crucial prewar State of the Union address after the C.I.A. removed it from previous Bush speeches? How high up were the authorities who ordered and condoned torture and then let the “rotten apples” at the bottom of the military heap take the fall? Who orchestrated the Pentagon’s elaborate P.R. efforts to cover up Pat Tillman’s death by “friendly fire” in Afghanistan?

And, for extra credit, whatever did happen to Bush’s records from the Texas Air National Guard?

A Better Sort of Insult — Dick Cavett on getting in a good one.

I haven’t ever found any great writing on that wonderful and often unappreciated art form, the insult.

There are two kinds of insult. “I was bored by your book” is one kind. “Your book? Once I put it down, I couldn’t pick it up,” is the other.

Although both are insults, only one is witty. Or, at least, funny. I suppose we should reserve the accolade “wit” for the very highest practitioners of the art — Parker, Wilde, Shaw, Twain, Kaufman, Levant, Marx et al. Some would include Rickles. (As when Sinatra entered a club while Don was onstage. Rickles: “Make yourself comfortable, Frank, hit somebody.”)

While on the subject, I believe it was writer/critic Clive James who is said to have remarked, when a man punched Sinatra in the face one night outside the stage door, “That’s the first time the fan hit the ….”

If there is a Top Ten list of insults, Churchill’s most famous one would be at least number three. It is, of course, the well-known exchange between Sir Winston and an irate lady MP.

Often botched in the re-telling, the correct version, according to an MP who claimed to have witnessed the notorious exchange, was:

Mr. Churchill, you are drunk.

Madame, you are ugly.

Mr. Churchill, you are extremely drunk!

And you, Madame, are extremely ugly. But tomorrow, I shall be sober.

Somewhere the witless got hold of it and added “..and you’ll still be ugly,” shamelessly spelling it out for the slow to catch on. The underlining of and the verbal stress on “I” needs no further help. The boobish add-on sinks it.