Kate Harding has no apologies to make for her weight. 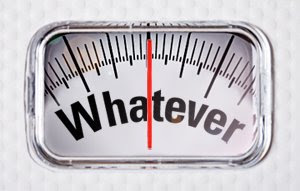 I was once standing on the street talking to a business contact I hoped to impress, when a homeless man came up and asked us for change. The man I hoped to impress said he didn’t have any, and the homeless guy spat, “Oh, fine, you just keep talking to the fat girl, then!” Which meant the business contact spent the next five minutes sputtering about how that guy was crazy and I shouldn’t think anything of it, while my face flamed and I stammered, “It’s … OK, really, it’s … please … it’s fine.” So much for the awesome professional image I was hoping to project.

I may not be as big as some of my friends and family members, and I may not be the size most people mentally associate with the word obese, but I am bloody well fat, and I have been most of the time since college. The homeless man might have been crazy, but he wasn’t wrong. The friends who kept insisting “You’re not fat!” were the ones out of touch with the truth.

But then the truth was never really the point. Thin women don’t tell their fat friends “You’re not fat” because they’re confused about the dictionary definition of the word, or their eyes are broken, or they were raised on planets where size 24 is the average for women. They don’t say it because it’s the truth. They say it because fat does not mean just fat in this culture. It can also mean any or all of the following:

So when they say “You’re not fat,” what they really mean is “You’re not a dozen nasty things I associate with the word fat.” The size of your body is not what’s in question; a tape measure or a mirror could solve that dispute. What’s in question is your goodness, your lovability, your intelligence, your kindness, your attractiveness. And your friends, not surprisingly, are inclined to believe you get high marks in all those categories. Ergo, you couldn’t possibly be fat.

But I am. I am cute and healthy and pleasant-smelling (usually) and ambitious and smart and lovable and fun and stylish and friendly and outgoing and categorically not icky. And I am fat — just like I’m also short, also American, also blonde (with a little chemical assistance). It is just one fucking word that describes me, out of hundreds that could. Those three little letters do not actually cancel out all of my good qualities.

The human obsession with body image and surface issues such as weight or sexual orientation isn’t new. Since time out of mind, fashion has dictated that the young, the beautiful, the well-built, and the straight are the optimum goals for all of us regardless of our age, our looks, our size, or our sexual orientation, and people literally kill themselves to achieve the impossibility of looking like the cover of Vogue or Muscle & Fitness. That sells billions of dollars of everything from cosmetics to industrial equipment, and we have entire shopping malls dedicated to selling stuff that promises to deliver the impossible: looking good enough for our own critical eye in the mirror and the perceived acceptance of other people who have their own issues with their own image. It is a vicious cycle that is fed by our own insecurities and those who exploit that most basic instinct in all of us to gain approval from others.

I admire Kate for the simple act of standing up and saying that she will not be bullied. Brava.

(Full disclosure: Kate was formerly a contributor to Shakesville, and although we have never met in person, we got to know each other through e-mails and solidarity with the many causes we stand for.)