The smackdown last night between Joan Walsh of Salon.com and Former Rep. Dick Armey got me to thinking about the number of Democrats who are showing up on TV to defend the president’s stimulus bill… or the lack thereof. I’m not the only one who’s wondering where they all are.

As Media Matters has documented, during the Bush administration, the media consistently allowed conservatives to dominate their shows, booking them as guests far more often than progressives. The rationale was that Republicans were “in power.”

It appears that old habits die hard. Even though President Obama and his team are in control of the executive branch and Democrats are in the majority in Congress, the cable networks are still turning more often to Republicans and allowing them to set the agenda on major issues, most recently on the debate over the economic recovery package.

On Sunday, conservatives began an all-out assault on President Obama’s economic recovery plan, with House Minority Leader John Boehner (R-OH) and Sen. John McCain (R-AZ) both announcing that they would vote against the plan as it stood. Despite Obama’s efforts at good faith outreach, congressional conservatives have continued to attack the stimulus plan with a series of false and disingenuous arguments.

The media have been aiding their efforts. In a new analysis, ThinkProgress has found that the five cable news networks — CNN, MSNBC, Fox News, Fox Business and CNBC — have hosted more Republican lawmakers to discuss the plan than Democrats by a 2 to 1 ratio this week: 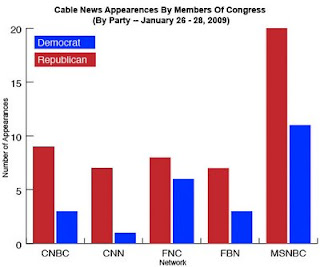 Even MSNBC, supposedly the new voice of liberalism, is overflowing with Republicans. Maybe that’s because they’re up there so Chris Matthews can slap them down? (Yeah, right.)

Update II: Driving home from work I listened to NPR’s All Things Considered. The lead-off story at 4:00 ET covered the stimulus vote and its future in the Senate. They interviewed a bunch of Republicans from the House, and Tom Davis, who isn’t even a member of Congress any more, about how this won’t hurt the Republicans. Then they moved on to Sen. Charles Grassley (R-IA) about the bill’s future in the Senate and how it would be impossible to pass the bill without 60 votes because of the threat of a filibuster. Sen. Grassley seemed downright cheerful about that prospect. No Democrats were heard from.

When they finished the interview, they moved on to a story about a dead body frozen in ice in an abandoned warehouse in Detroit.