Blossom Dearie, the first nightclub singer I ever saw in real nightclub, has died. 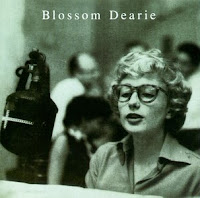 A singer, pianist and songwriter with an independent spirit who zealously guarded her privacy, Ms. Dearie pursued a singular career that blurred the line between jazz and cabaret. An interpretive minimalist with caviar taste in songs and musicians, she was a genre unto herself. Rarely raising her sly, kittenish voice, Ms. Dearie confided song lyrics in a playful style below whose surface layers of insinuation lurked. Her cheery style influenced many younger jazz and cabaret singers, most notably Stacey Kent and the singer and pianist Daryl Sherman.

But just under her fey camouflage lay a needling wit. If you listened closely, you could hear the scathing contempt she brought to one of her signature songs, “I’m Hip,” the Dave Frishberg-Bob Dorough demolition of a namedropping bohemian poseur. Ms. Dearie was for years closely associated with Mr. Frishberg and Mr. Dorough. It was Mr. Frishberg who wrote another of her perennials, “Peel Me a Grape.”

It was Thanksgiving, 1967, and our family had all met up in New York, since the older kids were all at boarding schools on the East Coast. We stayed at the Plaza Hotel, and we saw Mame, Henry, Sweet Henry on Broadway, and Now Is the Time for All Good Men… at a little theatre in the Village. But one evening we went down to the nightclub — I think it was the Plaza 9 — and there in the spotlight was a little lady with a child-like voice who sang and played piano while the customers smoked and drank. It was like something out of a 1940’s film noir, and I, who had just seen Casablanca for the first time the year before, thought it was the coolest thing to be there and hear a real nightclub singer, even if her name sounded made up (but it wasn’t). I’ve been hooked on her music ever since.