David Brooks takes a look at city life and dreams of Denver. 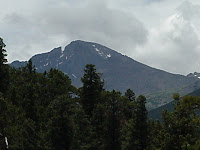 If you jumble together the five most popular American metro areas — Denver, San Diego, Seattle, Orlando and Tampa — you get an image of the American Dream circa 2009. These are places where you can imagine yourself with a stuffed garage — filled with skis, kayaks, soccer equipment, hiking boots and boating equipment. These are places you can imagine yourself leading an active outdoor lifestyle.

These are places (except for Orlando) where spectacular natural scenery is visible from medium-density residential neighborhoods, where the boundary between suburb and city is hard to detect. These are places with loose social structures and relative social equality, without the Ivy League status system of the Northeast or the star structure of L.A. These places are car-dependent and spread out, but they also have strong cultural identities and pedestrian meeting places. They offer at least the promise of friendlier neighborhoods, slower lifestyles and service-sector employment. They are neither traditional urban centers nor atomized suburban sprawl. They are not, except for Seattle, especially ideological, blue or red.

They offer the dream, so characteristic on this continent, of having it all: the machine and the garden. The wide-open space and the casual wardrobes.

I don’t know if Mr. Brooks has actually lived in any of the cities he’s mentioned, but I’ve spent time in all of those cities except San Diego, and I can tell you that based purely on my anecdotal experience, he needs to get out more.

Sure, there are nice neighborhoods that he describes in those cities, but they also have them in Miami, Toledo, Dallas, St. Louis, Boston, Minneapolis, Detroit, Cincinnati, Chicago, Albuquerque, Baltimore, and Evansville, Indiana. And there are scary places in all of his dream cities, as well as the strip-mall sprawl that makes Denver, Seattle, Orlando, and Tampa all look the same. (I saw Orlando in 1966, years before Disney showed up to turn it into the “Magic Kingdom”, and it was a quiet city with streets lined with cypress trees dripping Spanish moss. Now a lot of it looks like Anaheim.)

Mr. Brooks dreams of Denver. Well, I lived in the Boulder/Denver area from 1982 to 1990, and it’s a great place. It has a lot of culture, good theatre, decent schools, and a spectacular view of Longs Peak on the Front Range of the Rocky Mountains. It also has some pretty sketchy neighborhoods, homelessness, rush-hour traffic nightmares, unpredictable weather, and the Rockies are often obscured by the “brown cloud,” the smog that settles in during the winter months. You could say the same about Albuquerque or Minneapolis, substituting bone-chilling cold in the winter for the smog in the case of the Twin Cities.

Mr. Brooks seems to think that a lot of Americans have the luxury of just picking up and moving where they like because they can find a decent cup of coffee or walk to the office through the park. But as he says, it’s a dream. John Steinbeck referred to it in Travels with Charley as “the desire to be Someplace Else.” But most people live where they have family roots or can find a job, not where there’s a Starbuck’s or McDonald’s, and when they do move, it’s usually out of necessity — a job or family obligation — rather than just wanderlust or pioneer spirit. And while I agree that there’s something fascinating in dreaming of Someplace Else, there’s a certain sameness — and comfort — in finding that it’s not a lot different than the place you left. Or, as Buckaroo Banzai noted, “No matter where you go, there you are.”