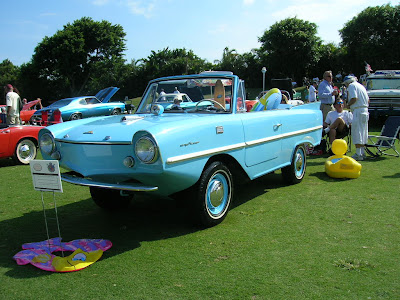 1966 Amphicar
Another entry from the Boca Raton Concours d’Elegance last weekend, this unique combination car/boat was sold for five years (1961-1966) and over 3,700 were built. Many of them are still on the road… or on the lake. 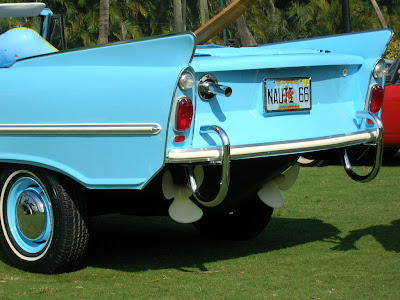 Once described as “not a good car and it’s not a good boat, but it does just fine,” it is more a novelty than a daily driver. Owners are very loyal and they all keep in touch; I remember back in the 1960’s seeing a bright red Amphicar in Northport, Michigan, plowing through the waters of Grand Traverse Bay and then tootling down Highway M-22. When I told the owner of the blue one at Boca that story, he nodded and said, “Yeah, that belongs to _________. He’s still got it.”

For you movie buffs, you might remember that the Amphicar made a cameo appearance in the 1967 James Coburn film The President’s Analyst, one of my favorite movies of all time.