“Years from now, when you talk of this — and you will — be kind.” – Tea and Sympathy by Robert Anderson. 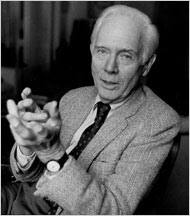 Robert Anderson, a playwright whose intimate emotional dramas like “Tea and Sympathy” and “I Never Sang for My Father” attracted big names to the Broadway stage if not always substantial audiences to Broadway theaters, died Monday at home in Manhattan. He was 91.

Mr. Anderson was a contemporary of Arthur Miller and Tennessee Williams, and though his reputation never ascended to the artistic heights that theirs did — his plays often walked a tightrope between realism and sentimentality — he was among the theater’s most visible, serious playwrights of the 1950s and ’60s.

Mr. Anderson also wrote screenplays, including those for “The Sand Pebbles” (1966), with Steve McQueen, and “The Nun’s Story” (1959), with Audrey Hepburn. But he thought of himself as a playwright who wrote movies for money.

I was standing on the terrace of a house called Glencliff in Independence, Kansas. It was the first evening of my first William Inge Theatre Festival in April 1991. I was at a dinner for invited guests, and I was there because I was friends of the Inge family. I walked up to the little bar set up on the patio and asked the bartender, a dapper man in a blue blazer and tie, for a drink. He promptly poured it out for me, smiled, and handed it over. A moment later, the real bartender, a college kid in the appropriate white coat, came back carrying a bag of ice, and thanked the other man, who turned to me and said, “Hi, I’m Bob.” It was Robert Anderson, and as it slowly dawned on me that I had been served my first drink at the Inge Festival by one of its first honorees, I stammered my apology for assuming that he was the bartender. He laughed, patted me on the shoulder, and said, “I’d probably make a better living doing that.”

I had read all of his plays — Tea and Sympathy; I Never Sang for My Father; You Know I Can’t Hear You When the Water’s Running; Silent Night, Lonely Night — and as we chatted I felt like I was talking to kindred spirit. I knew exactly how Tom Lee felt in Tea and Sympathy, being an “off horse” at a boarding school (although I didn’t have the outcome he did during my miserable year), and as I spoke to him about his occasionally tempestuous relationship with his father, I saw how he turned that into a story — I Never Sang for My Father— that anyone, even someone who is very close to his father, could understand in the most intimate way.

Bob and I became friends at that first Inge Festival, and we kept in touch by mail during the months between each festival. He came back every year — something very few of the honorees do after their time in the spotlight — and he participated in all the panel discussions. He took an active interest in my work as well, and when he asked for a copy of one of my plays, I was beyond flattered. A month later I received a five-page letter telling me how much he enjoyed the play, complimented my characters, my dialogue, my use of space, the depth of the relationships between the characters, and then with gentle guidance he told me what he thought didn’t work. He urged me to explore the characters with even more depth — “I know you can” — and asked me to keep working on it and let him see what developed. I had never had such a detailed critique of my work, not even in grad school, and he inspired me to keep writing.

Bob became a devoted friend. His letters, always either typed on his old manual typewriter or written in his nearly indecipherable handwriting, were full of stories about his life in Connecticut and his tennis games at the court he shared with his neighbor, Arthur Miller. And when he said, “If you’re ever in New York, let me know,” he meant it. In February 1993 I went to New York for a teacher’s conference, and when I wrote him and suggested we meet up for lunch, he called me immediately and set the date. True to form, at the appointed hour, he was waiting for me in the lobby of the New York Hilton, nattily dressed in a suit and tie. He had walked from his apartment up on Sutton Place. After lunch I offered to get him a cab for the trip back, but he smiled and said, “No, I love to walk.” And so we did, up to Central Park, talking about all sorts of things.

Bob never won the Pulitzer Prize or a Tony for his work, and in some ways I think it rankled him that other playwrights that he knew — and sometimes competed with for production space — did. But his attitude about it seemed to be philosophical, and his quip, “You can’t make a living in theatre, but you can make a killing,” pretty much summarized his feeling about those who became famous beyond their worth. Above all, he was always a gentleman and a gentle man.

The last time I saw him was at the Inge Festival in 2001. It was apparent that he was beginning to fade into the long night of Alzheimer’s; he remembered me, but did not remember reading a book I’d written and that he had written detailed notes on several years before. I said goodbye to him in the lobby of the hotel that Sunday morning in April 2001 with the sense that we were parting for good. I heard from friends who saw him over the years that he was slipping away, and I was sorry that I would not be able to sit with him in the shade of the trees at the 4-H picnic grounds in Independence and just talk one more time.

I’ll keep a place for you at the table in April, Bob.

PS: Can’t Live Without You is dedicated to Bob.