More Than a Moment — Leonard Pitts, Jr, writes that it will take more than just one event, such as the election of the first African-American president, to move us beyond our struggle with racism. 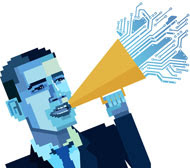 On the day after the day we never thought we’d live to see, in the first dawn of what some regarded as post-racial America, historian Lerone Bennett Jr. awoke and turned on the television. There, he says, he saw “this great and beautiful sister, one of the great products of our tradition who has lived through all these disappointments and she saw triumph and she was crying and she was saying, ‘America has changed. We won, we won.’

”I cried in that moment for the sister and with the sister, because I looked out my window and I looked to the east and I saw huge condominiums marching down the lakefront, far as I could see. White people are the primary occupants of those condominiums. I looked to the west and I could see evidence of the terrible housing, the terrible facilities prepared for black people in this country in 2008 and 2009. And I looked downtown and I saw these great cathedrals and skyscrapers. All that money, as far as I could see on the day after the election, controlled by white people.”

You may, if you wish, call this a reality check. You know how, when there’s a close play at the plate, the sportscasters will go to the instant replay to dissect what really happened? That’s what this is.

In commemoration of Black History Month, I have engaged a group of African-American historians to tell us all, even as time closes over it like waters, what happened that night in November 2008 in Chicago’s Grant Park.

We know what we saw, of course. We saw the photogenic African-American family come to the stage, waving to the many vibrant colors of us, saw Oprah Winfrey leaning on a stranger, her makeup running, saw memories of Selma and Birmingham glisten in Jesse Jackson’s eyes, saw TV talking heads coughing into fists, voices snagging on the rough shoals of sudden feeling.

What is less obvious than what we saw is what it meant. All those people crying and sighing and saying over and over again, ”I never thought I would live to see this day.” All those learned people jousting over whether we had now entered a new, ”post-racial America.”

Occasionally, one is privileged to live through a moment when history doesn’t just open wide like a door on a hinge, but you know it for what it is even then, even as it it is happening, so you can fix the details in your mind, rehearse the stories you will tell your grandchildren someday. The night Barack Obama was elected president was one of those moments.

But what did that tell us about who we are, what we are, where we are on the road to racial reconciliation? What, indeed, will we tell the grandchildren about that moment we saw?

Rahm Emanuel’s office, which is no more than a three-second walk from the Oval Office, is as neat as a Marine barracks. On his desk, the files and documents, including leatherbound folders from the National Security Council, are precisely arranged, each one parallel with the desk’s edge. During a visit hours before Congress passed President Barack Obama’s stimulus package, on Friday, February 13th, I absently jostled one of Emanuel’s heavy wooden letter trays a few degrees off kilter. He glared at me disapprovingly. Next to his computer monitor is a smaller screen that looks like a handheld G.P.S. device and tells Emanuel where the President and senior White House officials are at all times. Over all, the office suggests the workspace of someone who, in a more psychologized realm than the West Wing of the White House and with a less exacting job than that of the President’s chief of staff, might be cited for “control issues.”

Because the atmosphere of crisis is now so thick at the White House, any moment of triumph has a fleeting half-life, but the impending passage of the seven-hundred-and-eighty-seven-billion-dollar stimulus bill provided, at least for an afternoon, a sense of satisfaction. As Emanuel spoke about the complications of the legislation, he was quick to credit colleagues for shepherding the bill to victory—Peter Orszag, the budget director; Phil Schiliro, the legislative-affairs director; Jason Furman, the deputy director of the National Economic Council––but, in fact, nearly everyone in official Washington acknowledges that, besides Obama himself, Emanuel had done the most to coax and bully the bill out of Congress and onto the President’s desk for signing.

Not Gone Yet — There’s still some fight left in Ted Kennedy.

Since the diagnosis of his brain cancer last May, Mr. Kennedy has been given all manner of tributes and testimonials, lifetime achievement awards, medals of honor and standing ovations. But even as those accolades have provided sweet solace — and even some dark humor — as he endures grueling treatments, Mr. Kennedy, who turns 77 on Sunday, has been intent on racing time rather than looking back on it.

He considers unnecessary what his son Representative Patrick J. Kennedy of Rhode Island calls “the premature eulogizing,” or what Mr. Biden terms “a bordering on an obituary,” that has accompanied his life in recent months.

“Obviously I’ve been touched and grateful,” Mr. Kennedy said in a phone interview Friday from the rented home in Miami where he has spent most of the winter. “Beyond that, I don’t really plan to go away soon.”

Friends who have seen Mr. Kennedy describe him as driven and focused on work. He sometimes gets angry watching C-Span, pores over memorandums and speed-dials staff members and colleagues (sometimes from his sailboat, the Mya). He speaks frequently — and often on his trademark issue, overhauling the nation’s health care system — to President Obama; Mr. Biden; the White House chief of staff, Rahm Emanuel; and checks up on the Senate “chatter” with lawmakers.

Between chemotherapy treatments, physical therapy sessions and naps, Mr. Kennedy has been lobbying the White House on possible nominees for secretary of health and human services. (He has heard good things about the leading candidate, Gov. Kathleen Sebelius of Kansas, though he does not know her well and has been pressing for other candidates.)

While his office said he planned to return to Washington in a few weeks, Mr. Kennedy has been orchestrating efforts from afar, setting the foundation for legislation on what he calls “the cause of my life.”

“What has been essential to his recovery and motivation has been setting goals,” said Dr. Lawrence C. Horowitz, a former Kennedy staff member who has been overseeing his care. The first goal the senator set after cancer surgery in June was to speak at the Democratic National Convention (he did, despite kidney stones); then he resolved to attend Mr. Obama’s inauguration (he did, though he had a seizure afterward).

“Now, his goal is to play a central role in health care reform,” Dr. Horowitz said. “That’s what keeps him going.”

Frank Rich — What we don’t know will hurt us.

AND so on the 29th day of his presidency, Barack Obama signed the stimulus bill. But the earth did not move. The Dow Jones fell almost 300 points. G.M. and Chrysler together asked taxpayers for another $21.6 billion and announced another 50,000 layoffs. The latest alleged mini-Madoff, R. Allen Stanford, was accused of an $8 billion fraud with 50,000 victims.

“I don’t want to pretend that today marks the end of our economic problems,” the president said on Tuesday at the signing ceremony in Denver. He added, hopefully: “But today does mark the beginning of the end.”

No one knows, of course, but a bigger question may be whether we really want to know. One of the most persistent cultural tics of the early 21st century is Americans’ reluctance to absorb, let alone prepare for, bad news. We are plugged into more information sources than anyone could have imagined even 15 years ago. The cruel ambush of 9/11 supposedly “changed everything,” slapping us back to reality. Yet we are constantly shocked, shocked by the foreseeable. Obama’s toughest political problem may not be coping with the increasingly marginalized G.O.P. but with an America-in-denial that must hear warning signs repeatedly, for months and sometimes years, before believing the wolf is actually at the door.