Move To the Left — Will President Obama appoint liberals to the Supreme Court to stop its rightward tilt? 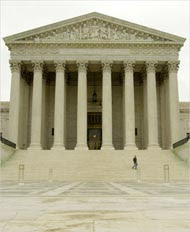 Justice John Paul Stevens, the leader of the Supreme Court’s liberal wing, likes to say that he has not moved to the left since he was appointed to the court by President Gerald R. Ford in 1975. It is the court, Justice Stevens says, that has moved to the right.

“Every judge who’s been appointed to the court since Lewis Powell” in 1971 “has been more conservative than his or her predecessor,” Justice Stevens said in a 2007 interview. He added that Justice Ruth Bader Ginsburg might have been the sole exception but included himself as one of those 11 ratchets to the right.

Justice Stevens, who continues to be a keen and lively participant in oral arguments at the court, will turn 89 in April. Actuarial statistics alone suggest that President Obama may end up naming his replacement.

And that will present the new president with a question. Should he appoint someone who by historical standards is a full-throated liberal, a lion like Justice William J. Brennan Jr. or Justice Thurgood Marshall? Or should he follow the lead of President Bill Clinton, whose two appointees, Justice Ginsburg and Justice Stephen G. Breyer, are by those standards relative moderates?

The vacancies that are likely to open up in the early years of the Obama presidency will, if the conventional wisdom holds, arise from the retirements of one or more of the court’s liberals — Justice Stevens, Justice Ginsburg or Justice David H. Souter.

If that is so, Mr. Obama will not be able to put a new liberal vote on the court. But he can, if he wants to, add a big liberal voice.

“A really powerful, articulate, moral, passionate voice on the left,” said Geoffrey Stone, a law professor at the University of Chicago, “would really change the dynamic on the court. It would pull the other justices who are inclined to be sympathetic to that voice in that direction. It would shift the center of the discussion — about what’s the middle.”

There is precedent for this. Justice Antonin Scalia, who has been on the court since 1986, was for years a lonely and energetic dissenter on the right. But the seeds he planted in those dissents have over time taken root in majority decisions.

According to a study last year by William M. Landes, who teaches law and economics at the University of Chicago, and Judge Richard A. Posner of the federal appeals court there, four of the five most conservative justices to serve on the court since 1937, of a total of 43, are on the court right now: Chief Justice John G. Roberts Jr. and Justices Scalia, Clarence Thomas and Samuel A. Alito Jr. The fifth was Chief Justice William H. Rehnquist, whom Chief Justice Roberts replaced in 2005.

The study also reinforced Justice Stevens’s caveat, counting Justice Ginsburg as more liberal than the justice she replaced, Justice Byron R. White. But Justice Ginsburg, whom the study identifies as the most liberal current justice, barely makes the Top 10 in the full tally.

The Roberts court is, then, conservative by the standards of recent history. But is it conservative in some absolute sense?

Frank Rich — Herbert Hoover is alive and well in the Republican Party. 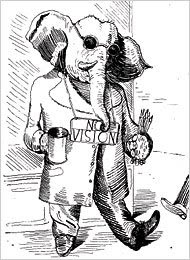 The House stimulus bill is an inevitably imperfect hodgepodge-in-progress. Obama’s next move, a new plan to prevent the collapse of America’s banks, may prove more problematic still, especially given the subpar record of the new Treasury secretary, Timothy Geithner, in warding off calamity while at the New York Fed. No one should expect the Republicans to give the new president carte blanche, fall blindly into lock step or be “post-partisan.” (Though that’s exactly what the G.O.P. demanded of Democrats with Bush: You were either with him or with the terrorists.)

But you might think that a loyal opposition would want to pitch in and play a serious role at a time of national peril. Not by singing “Kumbaya” but by collaborating on possible solutions and advancing a policy debate that many Americans’ lives depend on. As Raymond Moley, of F.D.R.’s brain trust, said of the cross-party effort at the harrowing start of that presidency in March 1933, Hoover and Roosevelt acolytes “had forgotten to be Republicans or Democrats” as they urgently tried to rescue their country.

The current G.O.P. acts as if it — and we — have all the time in the world. It kept hoping in vain that the fast-waning Blago sideshow would somehow impale Obama or Rahm Emanuel. It has come perilously close to wishing aloud that a terrorist attack will materialize to discredit Obama’s reversals of Bush policy on torture, military tribunals and Gitmo. The party’s sole consistent ambition is to play petty politics to gum up the works.

If anything, the Republican Congressional leadership seems to be emulating John McCain’s September stunt of “suspending” his campaign to “fix” the Wall Street meltdown. For all his bluster, McCain in the end had no fixes to offer and sat like a pet rock at the White House meeting on the crisis before capitulating to the bailout. His imitators likewise posture in public about their determination to take action, then do nothing while more and more Americans cry for help.

The problem is not that House Republicans gave the stimulus bill zero votes last week. That’s transitory political symbolism, and it had no effect on the outcome. Some of the naysayers will vote for the revised final bill anyway (and claim, Kerry-style, that they were against it before they were for it). The more disturbing problem is that the party has zero leaders and zero ideas. It is as AWOL in this disaster as the Bush administration was during Katrina.

If the country wasn’t suffering, the Republicans’ behavior would be a laugh riot. The House minority leader, John Boehner, from the economic wasteland of Ohio, declared on “Meet the Press” last Sunday that the G.O.P. didn’t want to be “the party of ‘No’ ” but “the party of better ideas, better solutions.” And what are those ideas, exactly? He said he’ll get back to us “over the coming months.”

His deputy, the Virginia congressman Eric Cantor, has followed the same script, claiming that the G.O.P. will not be “the party of ‘No’ ” but will someday offer unspecified “solutions and alternatives.” Not to be left out, the party’s great white hope, Sarah Palin, unveiled a new political action committee last week with a Web site also promising “fresh ideas.” But as the liberal blogger Markos Moulitsas Zúniga observed, the site invites visitors to make donations and read Palin hagiography while offering no links to any ideas, fresh or otherwise.

For its own contribution to this intellectual void, the Republican National Committee convened last week under a new banner, “Republican for a Reason.” Perhaps that unidentified reason will be determined by a panel of judges on a TV reality show. It had better be brilliant given that only five states (with 20 total electoral votes) now lean red in party affiliation, according to Gallup. At this rate the G.O.P. will be in Alf Landon territory by 2012.

The Next Ten Years — Hugo Chávez intends to stay in power in Venezuela and become the focal point of U.S. relations with Latin America.

One-time soldier and failed coup-plotter Hugo Chávez celebrates an extraordinary 10 years as Venezuela’s elected president on Monday. It hasn’t been a dull decade.

A bully, a friend of the poor, a jester, a brilliant political strategist, a showman, a statesman, a charmer, a pragmatist, an egomaniac with grand delusions — he has been all of that and more since he took the oath of office on Feb. 2, 1999.

Chavez, 54, has eclipsed his ailing mentor, Fidel Castro, to become the undisputed leader of a resurgent Latin American left, and he has no desire to yield that role anytime soon.

”El Comandante,” as he is known to his fervent followers, is asking Venezuelans to give him the chance to serve as president for life. On Feb. 15, voters will decide whether to lift term limits that otherwise would force Chávez out of the palace in 2013.

Even if he wins in the referendum — and polls find him with a slight advantage — the challenges won’t end anytime soon.

Indeed, Chávez appears willing to gamble hugely by continuing to spend billions of petrodollars on the poor — in a bid to create what he calls 21st century socialism — even though the collapse in oil prices is likely to cost his government at least half of its export income this year.

Which will come first — a rise in world oil prices that will replenish Chávez’s treasury or the crash of Venezuela’s economy, which could threaten his hold on power?

Don’t bet against Chávez. He’s a survivor. Locked up after a 1992 coup attempt, he gained his release from prison and won an underdog race for president in 1998 by vowing to be an agent for change. As president, he has survived a coup that ousted him for 48 hours, a crippling strike by the country’s all-powerful oil company and a recall election.

All the while, he has outsmarted opponents, befuddled Washington and won headlines from Moscow to Beijing.

Chávez reels off statistics showing that fewer Venezuelans are poor now than before he became president, but is that simply because he had the good fortune to be president when oil prices reached unprecedented heights? Has he created a society and economy that will better the lives of ordinary Venezuelans for years? Appraising his presidency will hinge on the answers to those questions.

The son of schoolteachers from Venezuela’s western plains, Chávez came to power railing against the ”corrupt elites” who he said had squandered ”several Marshall Plans” worth of oil income. Most Venezuelans, he thundered, festered in poverty and squalor.

He promised to root out corruption in politics, business, unions, even the church. He said he would dismantle the cabals of judges and lawyers who bought and sold justice.

As for the economy, ”We can no longer solely depend,” he said, ”on that external variable which is the price of a barrel of oil.” The economy must be diversified, poverty abolished and — above all — democracy extended to the masses, he said.

Ten years on, the results are mixed.

Obligatory Super Bowl Sunday Post — You may not know — or care — what teams are playing (Arizona Cardinals and Pittsburgh Steelers) and you may not know or care how much advertisers are paying for a thirty-second spot — or that Miller Brewing is paying for a one-second spot, but chances are you will be unable to escape The Game. So, like a drum solo at a rock concert, you might as well relax and enjoy it.