Last week it was noted that the Republicans seemed to be hogging all the air time on cable TV:

ThinkProgress reports today that during this week’s deliberations in the Senate, “Republican lawmakers outnumbered Democratic lawmakers 75 to 41 on cable news interviews by members of Congress (from 6am on Monday 2/2 through 11pm on Thursday 2/5).” It’s not quite as bad as last week, but it’s close. 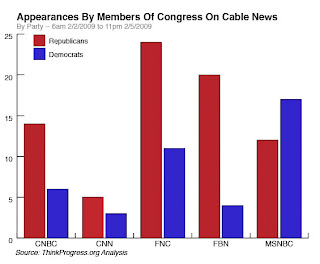