Dick Cheney may have left office on January 20, 2009, but according to Seymour Hersh, who was interviewed by Terry Gross on NPR’s Fresh Air, he left behind some assets that report to him on a regular basis. 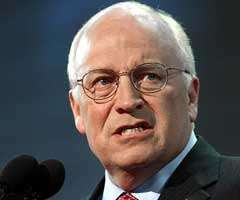 HERSH: You know, that’s a great question because I did think, I had a lot of people that had told me in the last year of Bush, “call me next, next February.” And, so far, even people who are out are still cherry because, you know, not so much Bush, but Cheney really is…he’s really smart.

GROSS: Are you saying that you think Vice President Cheney is still having a chilling effect on people who might otherwise be coming forward and revealing things to you about what happened in the Bush administration?

HERSH: I’ll make it worse. I think he’s put people left. He’s put people back. They call it a stay behind. It’s sort of an intelligence term of art. When you leave a country and, you know, you’ve driven out the, you know, you’ve lost the war. You leave people behind. It’s a stay behind that you can continue to contacts with, to do sabotage, whatever you want to do. Cheney’s left a stay behind. He’s got people in a lot of agencies that still tell him what’s going on. Particularly in defense, obviously. Also in the NSA, there’s still people that talk to him. He still knows what’s going on. Can he still control policy up to a point? Probably up to a point, a minor point. But he’s still there. He’s still a presence. And again, because of the problems this administration’s having filling jobs, a lot of people who served in the Bush Cheney government, particularly even in the White House people on most sophisticated staffs are still there. You simply can’t get rid of everybody, you may not even want to. Some are professional people. But Cheney is, I would never call it admiration, but, you know, formidable, yeah, this guy. This guy is the real McCoy.

The proper term for people inside an agency who are giving information to outsiders is “mole,” but in this case, I’m more of a mind of something else.

Ceti Eel
You remember these little critters from Star Trek II – The Wrath of Khan:

Ceti eels incubate their larvae within the plates of their jointed carapace. Upon emergence, the eel larvae can enter the ear of a larger animal, where it wraps itself around the cerebral cortex. This causes the host extreme pain and renders them extremely susceptible to outside suggestion. Over time, as the larva matures, the subject suffers from madness and eventual death.

None of this surprises me. As Mr. Hersh notes, Dick Cheney has been a Washington insider since the Nixon administration, and regardless of who won the election in 2008, he would have had his eels planted in just about every agency.

Of course, the question is why? Why would Mr. Cheney want to still be in control and still want to know who’s doing what? You can go all Tin Foil Hat and say he’s Dr. Evil or Darth Vader with a megalomaniacal need for Absolute Power over Everything, or you can just chalk it up to the simple fact that he’s a control freak. Either way, it’s creepy and unethical. In other words, a perfect fit for Dick Cheney.