When the president announced that he was giving Chrysler thirty days to work out an alliance with Fiat, the first thing I thought of was the ill-fated merger in the 1950’s between two dying auto companies in the United States: Studebaker-Packard.

A bit of automotive history here. After the Great Depression and World War II, the auto industry, which at one time had over 100 manufacturers in the U.S. alone, was down to a handful that consisted mainly of General Motors, Ford, Chrysler, Nash, Hudson, Studebaker, and Packard. When post-war production began again, it took nearly four years for the big companies to get newly-designed products out; the first cars in 1946 were basically warmed over models from 1941. However, the smaller companies, like Studebaker, were able to get new designs out faster, but they couldn’t keep up with the demand thanks to their antiquated plants, and by the mid-1950’s, Nash and Hudson were struggling. They merged in 1954, creating American Motors, and stayed alive. Studebaker and Packard had trouble finding their footing, and in what was seen as a move of desperation, also joined forces in 1954. It was a bad fit; neither company was a match for each other. Before the war Packard was a luxury marque that competed with Cadillac, while Studebaker was more geared to the middle class; “Aunt Bee” drove a Studebaker. Each company thought the other was the savior, but the two halves didn’t make a whole, either in terms of cash or market share. They built cars that attracted a lot of attention (see the interesting 1958 Packard Hawk below) but not a lot of buyers, and the recession of the late 1950’s doomed a company that couldn’t respond quickly enough to the new demand for compact cars like the Ford Falcon or the Dodge Dart. Even successful cars like the Studebaker Lark and the exotic Avanti couldn’t hold up a company that was still working out of a plant and hierarchy that was a business model from the 1920’s. Studebaker built its last car in 1966 in their plant in Hamilton, Ontario, and today the vestiges of the auto giant is Studebaker-Worthington Leasing, “a subsidiary of Main Street Bank – Kingwood Texas, which provides leasing services for manufacturers and resellers of business products and industrial products.” 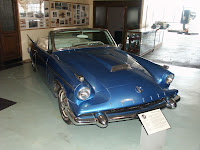 The circumstances are certainly different for Chrysler today, but I can’t help but think that a shotgun marriage with Fiat is doomed. Chrysler has already proved it doesn’t play well with others; their 1980’s alliance with Mitsubishi and their ill-fated merger with Germany’s Daimler are proof enough, and Fiat’s reputation in the United States was tarnished by selling cheap cars that didn’t hold up well on the American road; the joke was that the name stood for “Fix It Again, Tony.” And they have a guilt by association with the disastrous venture known as the Yugo, which was basically a Yugoslavian Fiat. For good or ill, when it comes to cars, the American public has a long memory. In spite of major improvements in quality, Detroit is still suffering from the stigma of poor quality cars that lost out to the Japanese in the 1970’s and 1980’s.

On the one hand, I would hate to see Chrysler go out of business. It would be a terrible blow to a lot of people, including a lot of people in my home town of Toledo, home of the Jeep. But if they can’t build something that people want and do it in a profitable way, they’re on the road to ruin anyway.