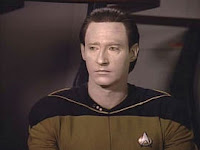 Via Steve Benen, who got it from Ron Chusid, a wing-nut warns of the danger of the same-sex marriage slippery slope that goes megabytes beyond Rick Santorum:

David Gibbs III, a lawyer who in 2005 fought to keep brain-damaged Terri Schiavo on life support, told rally participants gay marriage would “open the door to unusual marriage in North Carolina. “Why not polygamy, or three or four spouses?” Gibbs asked. “Maybe people will want to marry their pets or robots.”

Show me a hunky android that can give informed consent to sign a contract. If so, he’d be a sentient being, and as we all know, androids have rights, too.

Or maybe you go for the strong silent type…

Gort
Hey, whatever spins your hat. Live and [beep] let live, I say.