I can live up to my nickname once again.

It’s been almost a year since my 1995 Mustang GT was totaled, and a one-year mourning period is enough. 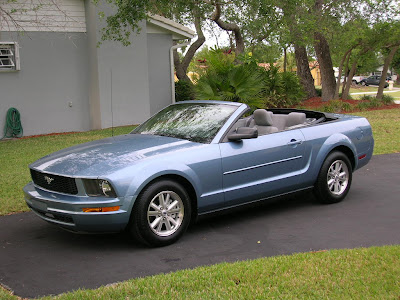 It’s a 2007, with the 4.0 L V-6 and a five-speed automatic. It has the requisite exhaust growl and it handles like it’s on rails. I got it at Maroone Ford in Fort Lauderdale after going on the internet and doing a search for what I wanted and what I could afford. Then I sent it out to all the Ford dealers in the Miami area saying that I wanted a new or used (back as far as 2007) Mustang V-6 convertible with automatic, any color except black or white, and the first one back to me at or below $17K would get the sale. Maroone came through after a bit of haggling, and that’s what I got. The Kelly Blue Book suggested retail price on this model is $17,240, and I paid about that—including taxes, title, tag, prep, and a limited warranty. It’s also “certified pre-owned,” which means they actually inspected the car and fixed it up, like put new tires on it and so forth.

Standard equipment on the 2007 is power everything except seats (they adjust ten different ways manually), A/C, cruise, AM/FM/CD player with MP-3 capability, keyless entry, etc., etc. I don’t need anything more than that.

I really like the color, too. Although I had thought of getting another red one, this is a nice shade, and it’s not like I haven’t had a blue car before.