The never-ending battle against reason and enlightenment continues. 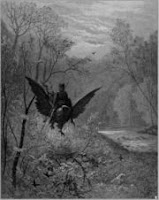 A Texas legislator is waging a war of biblical proportions against the science and education communities in the Lone Star State as he fights for a bill that would allow a private school that teaches creationism to grant a Master of Science degree in the subject.

State Rep. Leo Berman (R-Tyler) proposed House Bill 2800 when he learned that The Institute for Creation Research (ICR), a private institution that specializes in the education and research of biblical creationism, was not able to receive a certificate of authority from Texas’ Higher Education Coordinating Board to grant Master of Science degrees.

Berman’s bill would allow private, non-profit educational institutions to be exempt from the board’s authority.

HB 2800 does not specifically name ICR; it would allow any institution that meets its criteria to be exempt from the board’s authority. But Berman says ICR was the inspiration for the bill because he feels creationism is as scientific as evolution and should be granted equal weight in the educational community.

“I don’t believe I came from a salamander that crawled out of a swamp millions of years ago,” Berman told FOXNews.com. “I do believe in creationism. I do believe there are gaps in evolution.

I found this story at Shakesville, posted by Misty, who put it up without commentary, with the exception of the title: Inherit the Dumbassery.

What this fellow is looking for is a Masters in Divinity, which is granted by many colleges and universities, including Yale. But then, they would have to admit that what they are studying is theology, and they don’t want to admit that that’s what they’re pushing, because Creationism, to them, isn’t theology.

These people desperately want to be accepted into the scientific community because that would make them appear to be legitimate to the public at large as opposed to only those who follow their beliefs. They want to make their “science” acceptable to the non-believer. However, most people who understand the basics of science that they teach you in Grade Six know that science studies facts, not beliefs. Facts can be tested and quantified, proven or disproved. A scientific fact doesn’t change because you don’t believe it, and wishing doesn’t make it so.

The true fraud here isn’t the promotion of Creationism over evolution; it’s the labeling of creation as a science when there’s no factual evidence to back it up.

What’s next; a Masters in Zoology specializing in unicorns and hippogriffs?