The Seattle Post-Intelligencer prints its final edition today, but will live on on-line. 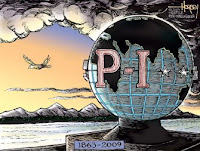 “Tonight we’ll be putting the paper to bed for the last time,” Editor and Publisher Roger Oglesby told a silent newsroom Monday morning. “But the bloodline will live on.”

In a news release, Hearst CEO Frank Bennack Jr. said, “Our goal now is to turn seattlepi.com into the leading news and information portal in the region.”

This will be the likely future of a lot of struggling newspapers; changing with the Times, so to speak, and the era of cities with more than one major newspaper is ending. In my own experience, places I’ve lived like Toledo, Minneapolis, Miami, Denver, and Albuquerque have all lost their second voice. It’s too bad; the variety and diversity are lost to homogenization and a neighborhood feel.

The fact that the P-I is going to strictly an on-line edition is probably the wave of the future, and I wish them the best. But there’s something comforting about being able to sit and leisurely do the crossword puzzle in a recliner that you just can’t capture on a laptop.

(Cartoon by David Horsey. The eagle was the symbol on top of the P-I globe. Commemorative edition front page (pdf) here.)