Little Things Mean a Lot — How the art of political distraction works.

The questions flew hard and fast at President Obama last week as he stood on the White House South Lawn, preparing to escape for California’s gentler climes. How, Mr. Obama was asked, would he quell public anger over $165 million in bonuses for employees of the bailed-out insurance giant, A.I.G.?

“I don’t want to quell anger,” he replied. “I think people are right to be angry. What I want us to do, though, is channel our anger in a constructive way.”

It was too late. By the time Air Force One took off, Congress was in full-recriminations mode, with the usual hearings and declarations of outrage. The A.I.G. chief executive, Edward M. Liddy, was pleading with bonus-takers who got more than $100,000 to give half the money back. The search for culprits — Treasury Secretary Timothy F. Geithner? Senator Christopher J. Dodd, the Banking Committee chairman? Mr. Obama himself? — was in full bloom. That old Washington question was back: Who knew what, and when?

But something else about the scene rang familiar: it was a sliver of news, seemingly a side issue, run amok. In the grand scheme of today’s taxpayer expenditures — $787 billion for economic recovery; another $700 billion to shore up shaky financial institutions; who knows how many more billions tomorrow — the A.I.G. bonuses amount to small change. But the small change became a big deal in an instant, dominating the talk shows and threatening to undermine Mr. Obama’s domestic agenda.

“This is the kind of issue Washington chases like catnip,” David Axelrod, Mr. Obama’s senior adviser, lamented in an interview. “What would be a mistake would be to get so distracted by the catnip-chasers that we lose our own path. We are not going to do that.”

Mr. Obama is hardly the first American president to grapple with a distraction, a diversion — an outright red herring, some might call it — that grew bigger than itself. Ronald Reagan had the Air Force’s $7,622 coffeepot and the Navy’s $435 claw hammer, as well as an ill-fated effort to save money by classifying ketchup as a school lunch vegetable. Bill Clinton had midnight basketball and a high-priced haircut from a Beverly Hills stylist aboard Air Force One. George W. Bush was blindsided by an executive branch decision to contract with Dubai Ports World, an Arab-owned company, to manage terminals in six American ports.

What these stories share is a simple and clear narrative that captures the public imagination by tapping into some larger fear or existing perception — “a proxy for a bigger concern,” in the words of Ed Gillespie, former counselor to Mr. Bush. If that concern runs deep enough, the side issue becomes the main issue.

Thus did the A.I.G. bonuses become a symbol of long-simmering taxpayer resentment over Wall Street bailouts, and economic inequity in general, raising essential questions about fairness and personal responsibility — themes Mr. Obama has repeatedly evoked. The story line had shock appeal: fat cats get rewarded for driving the economy into a ditch.

A CHARMING visit with Jay Leno won’t fix it. A 90 percent tax on bankers’ bonuses won’t fix it. Firing Timothy Geithner won’t fix it. Unless and until Barack Obama addresses the full depth of Americans’ anger with his full arsenal of policy smarts and political gifts, his presidency and, worse, our economy will be paralyzed. It would be foolish to dismiss as hyperbole the stark warning delivered by Paulette Altmaier of Cupertino, Calif., in a letter to the editor published by The Times last week: “President Obama may not realize it yet, but his Katrina moment has arrived.”

Six weeks ago I wrote in this space that the country’s surge of populist rage could devour the president’s best-laid plans, including the essential Act II of the bank rescue, if he didn’t get in front of it. The occasion then was the Tom Daschle firestorm. The White House seemed utterly blindsided by the public’s revulsion at the moneyed insiders’ culture illuminated by Daschle’s post-Senate career. Yet last week’s events suggest that the administration learned nothing from that brush with disaster.

Otherwise it never would have used Lawrence Summers, the chief economic adviser, as a messenger just as the A.I.G. rage was reaching a full boil last weekend. Summers is so tone-deaf that he makes Geithner seem like Bobby Kennedy.

Bob Schieffer of CBS asked Summers the simple question that has haunted the American public since the bailouts began last fall: “Do you know, Dr. Summers, what the banks have done with all of this money that has been funneled to them through these bailouts?” What followed was a monologue of evasion that, translated into English, amounted to: Not really, but you little folk needn’t worry about it.

Yet even as Summers spoke, A.I.G. was belatedly confirming what he would not. It has, in essence, been laundering its $170 billion in taxpayers’ money by paying off its reckless partners in gambling and greed, from Goldman Sachs and Citigroup on Wall Street to Société Générale and Deutsche Bank abroad.

Summers was even more highhanded in addressing the “retention bonuses” handed to the very employees who brokered all those bad bets. After reciting the requisite outrage talking point, he delivered a patronizing lecture to viewers of ABC’s “This Week” on how our “tradition of upholding law” made it impossible to abrogate the bonus agreements. It never occurred to Summers that Americans might know that contracts are renegotiated all the time — most conspicuously of late by the United Automobile Workers, which consented to givebacks as its contribution to the Detroit bailout plan. Nor did he note, for all his supposed reverence for the law, that the A.I.G. unit being rewarded with these bonuses is now under legal investigation by British and American authorities.

Within 24 hours, Summers’s stand was discarded by Obama, who tardily (and impotently) vowed to “pursue every single legal avenue” to block the bonuses. The question is not just why the White House was the last to learn about bonuses that Democratic congressmen had sought hearings about back in December, but why it was so slow to realize that the public’s anger couldn’t be sated by Summers’s legalese or by constant reiteration of the word outrage. By the time Obama acted, even the G.O.P. leader Mitch McConnell was ahead of him in full (if hypocritical) fulmination.

Not Getting Any Younger — Harley-Davidson faces a greying future and tries to go after the youthful market.

After riding high for two decades, the company that makes the hulky bikes that devoted riders affectionately call Hogs is sputtering. Harley’s core customers are graying baby boomers, whose savings, in many cases, have gone up in smoke in the market downturn. Few are in the mood to shell out up to $20,000 or more for something that is basically a big toy, and the company, in turn, has not captured much of the younger market.

And though Harley’s woes pale in comparison to what the automakers face — Harley’s revenue dipped 2 percent last year while Detroit was crashing — overproduction and loose lending practices have burdened the company’s finances.

In a pattern similar to that of the housing bust, Harley goosed sales by luring many buyers with no-money-down loans. A subsidiary created about 15 years ago, Harley-Davidson Financial Services, made those loans and packaged them into securities to sell to investors. As the credit market skidded, so did this subsidiary.

As much as one-fourth of the $2.8 billion in loans issued by Harley-Davidson Financial Services last year were subprime, with interest rates as high as 18 percent. As the downturn took hold, some borrowers started defaulting on loans and investors stopped buying the securities, forcing Harley to write down $80 million of debt last year, analysts said. Although it recently tightened lending standards, the company is still chasing buyers by offering credit.

Amphi-Truck — A display on Calle Ocho in Miami pays tribute to the automotive/maritime ingenuity of a man trying to drive out of Cuba. 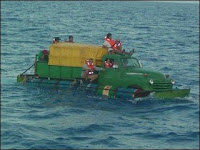 Motorists traveling along Southwest Eighth Street in Miami have been slowing down to check out a fluorescent green 1951 Chevy pickup parked in front of the Maroone Chevrolet dealership.

It’s not for sale, though.

Consider the retrofitted antique a salute to the imagination of the so-called Cuban ”truck-o-nauts.”

During the summer of 2003, an identical model was ingeniously adapted to float in calm waters. The truck was ”driven” across the Florida Straits all the way from Cuba, hauling 12 Cuban refugees seeking new lives in the United States.

Although the group was intercepted at sea by the U.S. Coast Guard and the ’51 Chevy sunk by the guns of a cutter, the tale of the amphibious pickup circled the world. To the Cuban exile community, it became a symbol of the ingenuity and perseverance of people trying to escape Cuba.

The truck on display pays homage to the original.

”My dream was to build a replica of the truck that was used in the first attempt, to keep it as a museum piece. And here it is, six years after the voyage, it’s incredible,” said Luis Grass, 41, the man who came up with the idea of the seafaring truck and made history by escaping from Cuba twice in amphibious vehicles.

Grass made the first attempt with family members and friends, including Marcial Basante and Rafael Diaz, both now living in Miami.

Diaz was the first Cuban ”truck-o-naut,” using a modified 1948 Buick to try to escape the island with his family during the 1994 Cuban rafter crisis. On that first attempt, he had electrical problems was forced to turn back.

Diaz finally escaped in 2005, along with his wife and kids, aboard a 1948 Mercury that he adapted for the ocean voyage.

They were detained just a few miles from Key West and held temporarily at Guantánamo. U.S. authorities allowed them to travel to Miami a few days later because they had immigrant visas.

The ’48 Mercury was also sunk. Diaz now works as a mechanic for Kendall Chevrolet in South West Miami, but did not participate in rebuilding the vehicle now on exhibit on Calle Ocho.

In 2004, Grass drove an old Buick that also ended up being sunk by the Coast Guard, after the passengers on board had been rescued. He and his wife and kids spent several months in Guantánamo — after avoiding a second repatriation — and ended up in Costa Rica, where they remained until mid-February of 2005.

Finally, Grass, who had decided to enter the United States at all costs, traveled from Costa Rica to the U.S.-Mexican border. He and his wife, Isora Hernandez, and their 5-year-old son, Angel Luis, walked across the border.