Coral Gables Corruption — The “City Beautiful” has some flaws in the make-up. 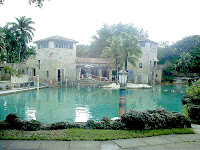 Coral Gables has long been Miami-Dade’s grande dame, majestic with her canopied streets, historic landmarks and stately homes, imperious in her municipal rectitude.

In the past three years, however, the City Beautiful has plunged headlong into a starring role in its own tawdry reality series.

• The city manager who had a fling with the mayor’s secretary and indulged in fancy steak and red-wine lunches on the taxpayers’ tab, and then, when caught, tried to cover it up.

• Sex in the office at public works. Cocaine and ghost employees at building and zoning.

Anything else? Oh, yes: the new purchasing director who quit on her first day on the job, apparently after the whistle-blower filled her in on the juicy tidbits.

What in city founder George Merrick’s name is going on at Coral Gables City Hall?

”We’re not used to being in the spotlight,” said Vice Mayor William Kerdyk. ”We’ve always prided ourselves on being a community that has very few issues outside of dealing with the quality of life.

”This is something totally off our scale.”

Although the waves of scandal have subsided since City Manager David Brown, faced with certain termination by the City Commission, took early retirement from his $185,000-a-year post in November, the city is struggling to ride out the backwash.

And as the April 14 election approaches, two veteran commissioners, Maria Anderson and Ralph Cabrera, have drawn challengers who criticize the incumbents’ oversight of the manager — or lack of it. Anderson, who unlike Cabrera defended Brown, may be especially vulnerable.

Anderson insists that she’s done discussing the former city manager. ”I know there are issues that we are going to be dealing with that may be a result of his actions, but we’ve had enough,” Anderson said. ”This is over. We put a bad chapter behind us. Let’s move on.”

The Replacement — Jeffrey Toobin on the rise of Roland Burris.

Few senators in history have made a more ignominious national début than Roland Burris. Blagojevich appointed Burris, a former Illinois comptroller and attorney general, just three weeks after the Governor had been arrested and taken from his home in handcuffs. Blagojevich was charged with crimes relating to his alleged attempts to exploit his office for personal and political gain, including trying to sell Obama’s Senate seat. (Blagojevich maintains he did nothing wrong.) The entire Democratic caucus in the Senate, as well as the President-elect, asked Burris to refuse the appointment, and Blagojevich was impeached and removed from office a few days later. Burris ignored the entreaties, assumed the office, and plunged almost immediately into another scandal.

In a succession of raucous public appearances, Burris gave contradictory, perhaps even self-incriminating, explanations of the circumstances leading to his appointment. (He has both denied and admitted discussing the Senate seat with Blagojevich’s advisers in advance of his selection.) In short order, editorials in the Chicago Tribune and Sun-Times called for Burris’s resignation, a demand echoed by the new governor of Illinois, Pat Quinn, and by Dick Durbin, the state’s senior senator. “As far as my colleagues here in the Senate, they are grasping as I am to try to get to the truth of this situation,” Durbin said after failing to persuade Burris to quit. “They are confused and concerned about the disclosures that have been made.” An Illinois prosecutor is investigating Burris for possible perjury and related crimes, and the matter is also before the Senate Ethics Committee.

During his long career in Illinois politics, Burris has encountered many of the state’s most influential figures, some of them principled risk-takers and some corrupt rogues. And it’s been clear that Burris belongs to neither category. He is a conventional politician, one guided far more by cautious self-interest than by ideological passion. His self-regard may be greater than that of some of his peers; he is especially known for the words of self-celebration carved into the wall of a mausoleum that is waiting for him in a Chicago cemetery. (The structure bears the inscription “Trail Blazer” and lists such accomplishments as being the first African-American undergraduate at Southern Illinois University to be an exchange student at the University of Hamburg, in Germany.) “He was a figure of fun, because he was highly egocentric,” Alan Dobry, a former Democratic ward committeeman in Chicago, said of Burris’s years as a local politician. “When he was in office, he had two aides who went around with him, and they were generally referred to as the ‘Rolaids.’ ” According to the Harvard sociologist William Julius Wilson, a longtime student of Chicago politics, Burris “was a soldier, part of the machine. He’s not a distinguished politician. He’s not a powerful political thinker.” Of course, this description hardly distinguishes Burris from many of his colleagues on Capitol Hill. In his very ordinariness, Burris may represent a triumph of sorts for the civil-rights movement, which was, at least in part, a struggle for black people to be seen as just like everybody else.

Frank Rich — The Culture Warriors are fading into irrelevancy.

It’s not hard to see why Eric Cantor, the conservative House firebrand who is vehemently opposed to stem-cell research, was disinclined to linger on the subject when asked about it on CNN last Sunday. He instead accused the White House of acting on stem cells as a ploy to distract from the economy. “Let’s take care of business first,” he said. “People are out of jobs.” (On this, he’s joining us late, but better late than never.)

Even were the public still in the mood for fiery invective about family values, the G.O.P. has long since lost any authority to lead the charge. The current Democratic president and his family are exemplars of precisely the Eisenhower-era squareness — albeit refurbished by feminism — that the Republicans often preached but rarely practiced. Obama actually walks the walk. As the former Bush speechwriter David Frum recently wrote, the new president is an “apparently devoted husband and father” whose worst vice is “an occasional cigarette.”

Frum was contrasting Obama to his own party’s star attraction, Rush Limbaugh, whose “history of drug dependency” and “tangled marital history” make him “a walking stereotype of self-indulgence.” Indeed, the two top candidates for leader of the post-Bush G.O.P, Rush and Newt, have six marriages between them. The party that once declared war on unmarried welfare moms, homosexual “recruiters” and Bill Clinton’s private life has been rebranded by Mark Foley, Larry Craig, David Vitter and the irrepressible Palins. Even before the economy tanked, Americans had more faith in medical researchers using discarded embryos to battle Parkinson’s and Alzheimer’s than in Washington politicians making ad hoc medical decisions for Terri Schiavo.

What’s been revealing about watching conservatives debate their fate since their Election Day Waterloo is how, the occasional Frum excepted, so many of them don’t want to confront the obsolescence of culture wars as a political crutch. They’d rather, like Cantor, just change the subject — much as they avoid talking about Bush and avoid reckoning with the doomed demographics of the G.O.P.’s old white male base. To recognize all these failings would be to confront why a once-national party can now be tucked into the Bible Belt.